Jesse Richman started this event with a slim lead over second placed rider, and two time freestyle world champion, Carlos Mario. If either of them manages to go on and win this event, they will win the World Championship. Carlos Mario has moved himself a step closer to a third world title by winning the single elimination contest which ran to completion on this the first day in Germany. 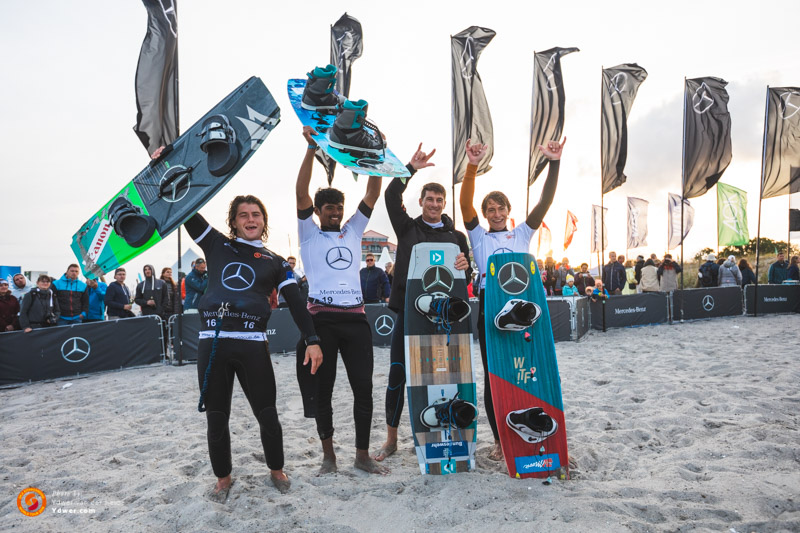 In a twist of fate he was helped by the fact that an addictively competitive Aaron Hadlow was once again the talk of the day, finding good form in very mixed conditions to be able to beat Jesse in the semi final. Although Aaron wasn’t landing as many double handle-passes as the younger generation he was up against, his smooth big airs, assured kite loops in average winds and the most attractive of all the board-offs we’ve seen in this contest this season mixed technicality with flow. In several close heats, the master Hadlow was back to his old tricks, tactically spot on and jumping ahead of his heat rival to crush them in the vital few minutes with his cunning and guile.

A rider’s three best tricks count and they must register a trick in each handle-pass, kite-loop and big air category. A fourth score is awarded on overall impression; how much skill and attempted progression was shown throughout the heat. Are they pushing to be the most complete rider?

The forecast promised strong conditions beyond 20 knots. In these frontal conditions things can change quickly, and they did on Friday. At times a heat would start with riders working their kites hard to find any sort of lift and would finish with them having swapped down to their eight metre kites, or grimly holding on to their 12s, or even 14s.

Round one was the most challenging in that the conditions were lightest, which is always the most conflicted in terms of favouring freestyle-focused riders over the most staunch big air crew. However, for each the judging criteria is the same and as much height as possible is still required, but it’s always amazing to see how much height the top and most powered new school riders can pop off the water with their kite at 45 degrees… often seemingly higher than those sending their kite for a boost or board-off in 15 knots! 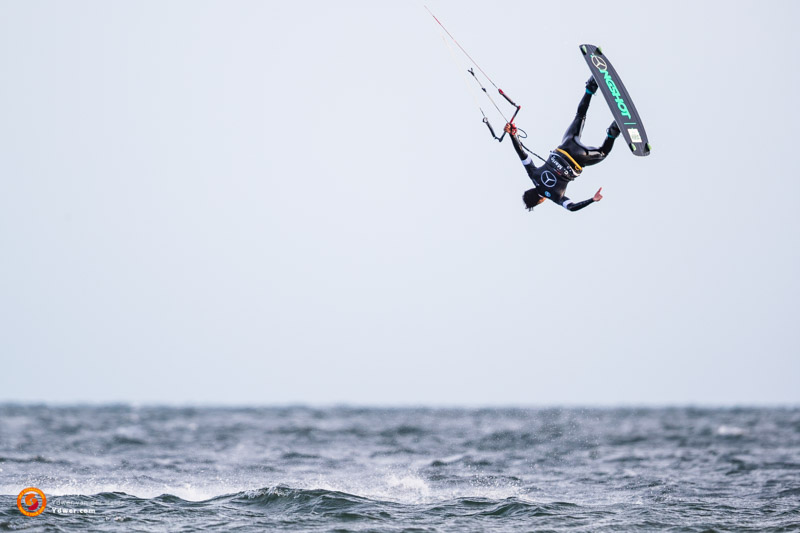 Although there were casualties ejected earlier from this single elimination than they’ve been used to this season, like French rider Paul Serin and Brazilian Set Teixeira, eventually the quarter final pairings were the justified outstanding performers so far:

Luis Alberto Cruz was surely close to getting the nod against Maxime, having landed a huge sent triple handle-pass, a powerful kite loop BS 3 and some impressive front board-offs that were packed with hangtime. Valentin Garat’s charge was abruptly brought to a halt by an uber accomplished Carlos Mario, who now looks to be enjoying switching to board-off specific gear towards the end of a heat rather than dreading it. Hadlow managed to pull back a small deficit in the early heavy freestyle trade-offs against super powered new schooler Nicolas Delmar to finish that battle off with several majestic board-offs to make the difference. Finally Jesse Richman’s consistently high scores in all categories eventually cancelled out an explosive and powered start made by up and coming freestyle charger, Louka Pitot.

The wind dropped back a bit by the semis, but switched more side onshore and became a little smoother for arguably the most entertaining heats of the day.

Maxime Chabloz held a half point lead over Carlos Mario after the first three tricks each, indicating the pure freestyle talent developed by the young Swiss technician, but Carlos was soon into gear and again earning the difference switching up to a bigger bow style kite and straps to smoothly stomp a double front roll board off in the last minute. It may not be to everyone’s liking, but from a pure sport point of view, it’s currently a game changer and Carlos Mario understands what he has to do to win. 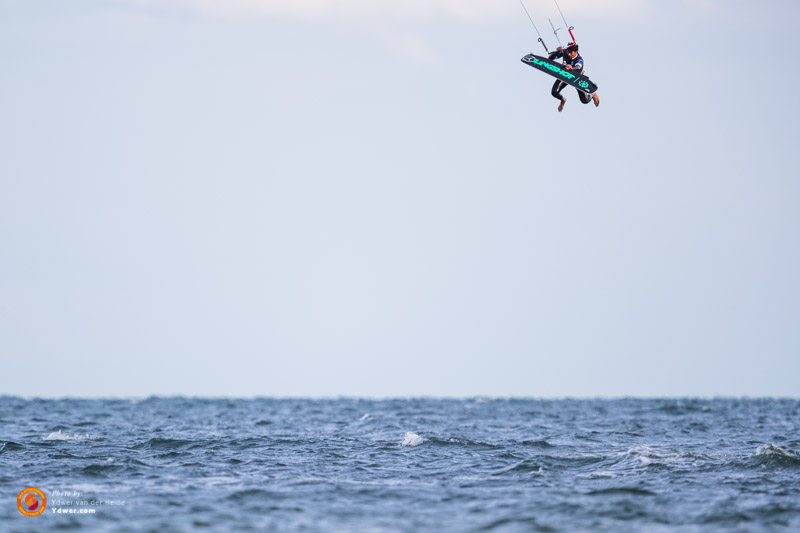 It didn’t take him long to amass, but Carlos Mario now has a range of exciting board-offs in his arsenal

In the other semi-final it was a King of the Air contest with Aaron Hadlow up against Jesse. Both would have liked much more wind, but from our perspective it brought out the challenge for both riders to deflect each other’s categorical attacks as best they could. Jesse eeks a lot of height and amplitude out of both his 14 and 12 metre Naish Torch kites as well as a powerful pull for his kite-loop handle-pass combinations, but again it was the perfect tweaked leg kicks at the apex of a big sent double front roll board-off that exhibited stunning control and snuck the Brit ahead of the Hawaiian. Come the final minute Jesse crashed a few tricks and Hadlow had made it to his first final this season. 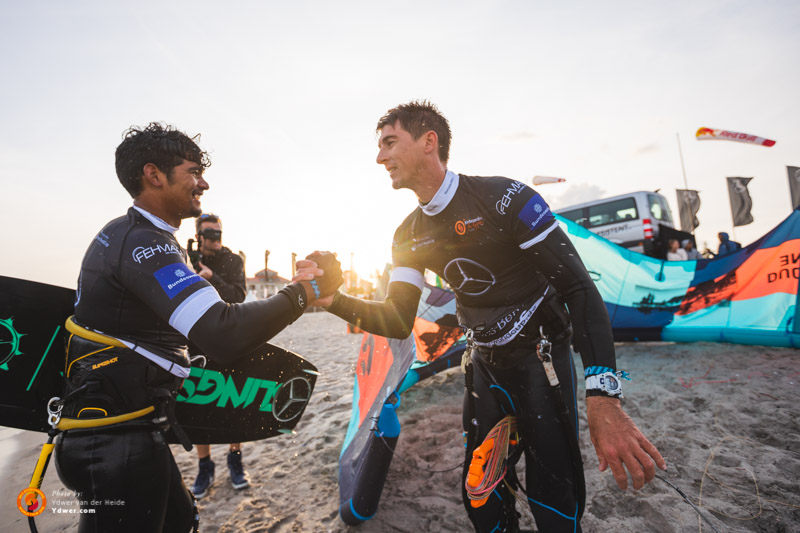 Carlos and Aaron after the final

On the podium at the end Hadlow was gracious in defeat and complimented Carlos Mario’s extreme and ‘out of this world’ freestyle power; an accolade often pointed at Aaron himself by his older competitors ten years ago. In fairness, Carlos really took his powered freestyle game up another notch at least, clearly relishing a victory over Aaron who he watched from afar when growing up back in Brazil. 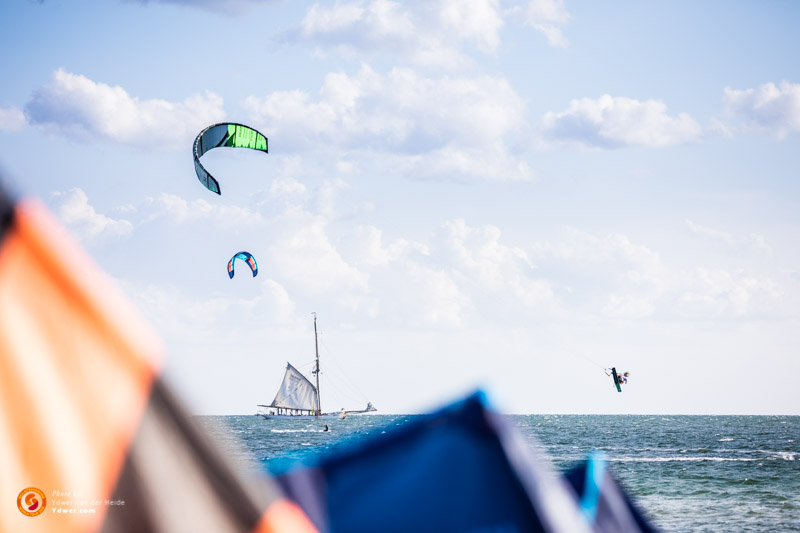 Jesse limited the damage by winning the third place mini-final and with the women’s event starting tomorrow, he can get a short rest to re-group before he starts his final double elimination challenge for the World Title.

In this fourth and final round of the season, both formats chosen for this Air Games style world championship are paying off. The mixed category is bringing a new tactical approach that is growing in its interest. And still with four event days in the pocket, the double elimination is the fairest way to finish a close World Championship; giving all riders a second chance in often tricky, up and down conditions. 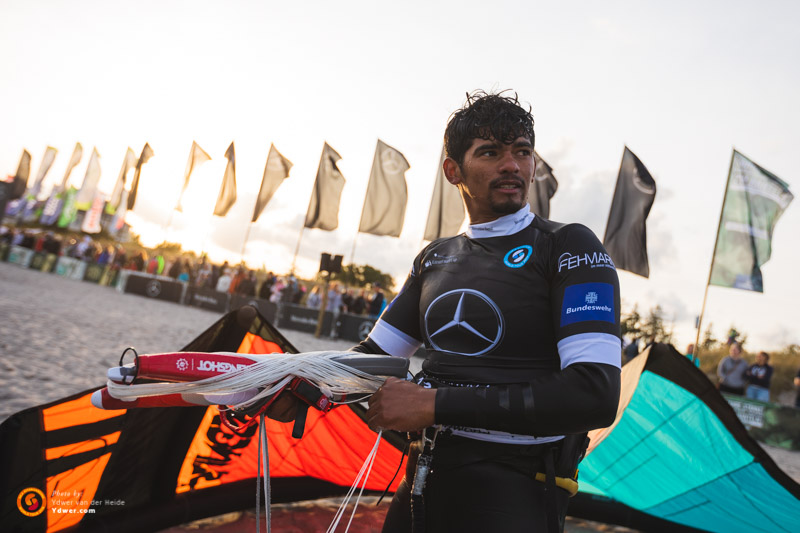 Carlos Mario now awaits a contender in the double elimination final, so at worst he’s guaranteed second place at this event already. Jesse basically needs to reach the final, and then beat him twice if he’s going to stop the Brazilian winning the title

Carlos Mario awaits someone in the double elimination final. If anyone can claw their way back up through several heats when a championship is at stake, it’s Jesse Richman (sadly the third placed tour rider Positio Martinez from the DR had his visa denied, so was unable to make this event).

There are one or two days that promise stronger winds in the event window; conditions which should play more into Jesse’s hands. Can we finish the tour with a bang after starting it in such strange no wind conditions in Leucate? Come on Fehmarn; fire up the fuel!

Saturday’s plan: The start of the women’s competition where Mikaili Sol and Hannah Whiteley have finished first and second all season, followed closely by Pippa van Iersal.