True seminal moments in sport are rare. At 13 years-of-age Mikaili Sol is on the verge of etching her name in the history books as one of only a handful of child prodigies who manage to fulfil their potential, enjoying immediate success with championship victory when they first burst onto the scene. 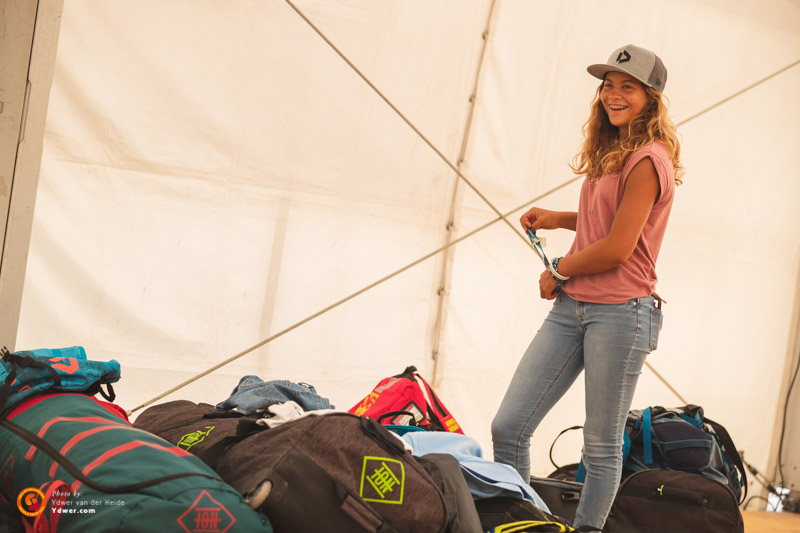 On the verge of victory, Mikaili Sol

Aaron Hadlow won the first of his five titles when he was 15 in 2004. The most likely comparison is with Gisela Pulido. The Spaniard won her first kiteboarding world title at just ten years-of-age in 2004. Hindsight is a wonderful thing, who knew she’d manage to amass nine more? Aaron said today that whatever happens, Mikaili is set to dominate in the coming years. Who else won their first World Title at 13?  A young windsurfer called Robby Naish. In doing so, he gave himself time to go on and do okay… winning 23 more!

Sol, a home schooled Brazilian who lives in Prea, needs just one more heat win to claim her first major World Championship. Agonisingly, her semi-final heat against French rider Pauline Valesa was cancelled half-way through this afternoon due to dropping wind conditions. The Brazilian had already edged a slight lead according to the judges’ scoring app. 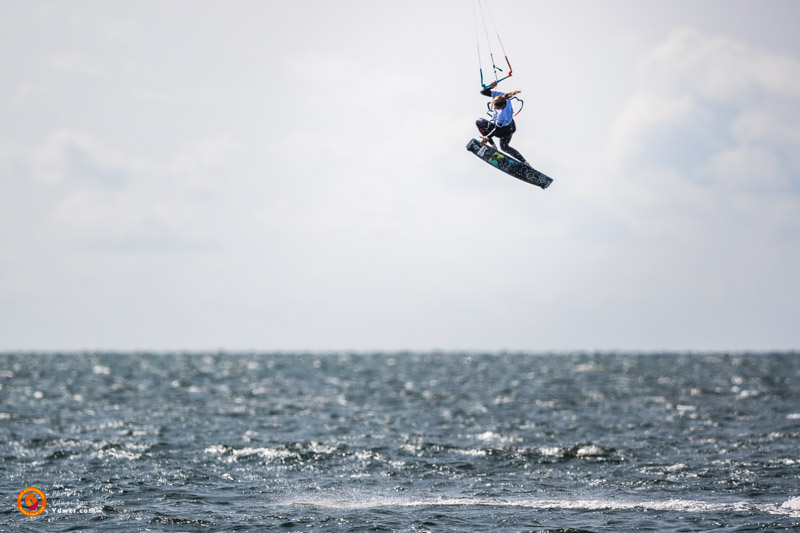 Having finished second to Mikaili in each event this season, all Hannah Whiteley can do is take each heat as it comes, continue to win and hope her opponent somehow slips up. Winning the first semi-final after a close match-up with 19 year-old Dutch rider Pippa van Iersal (ranked 3rd), 3 x British Champion Hannah has already booked her place in the single elimination final. 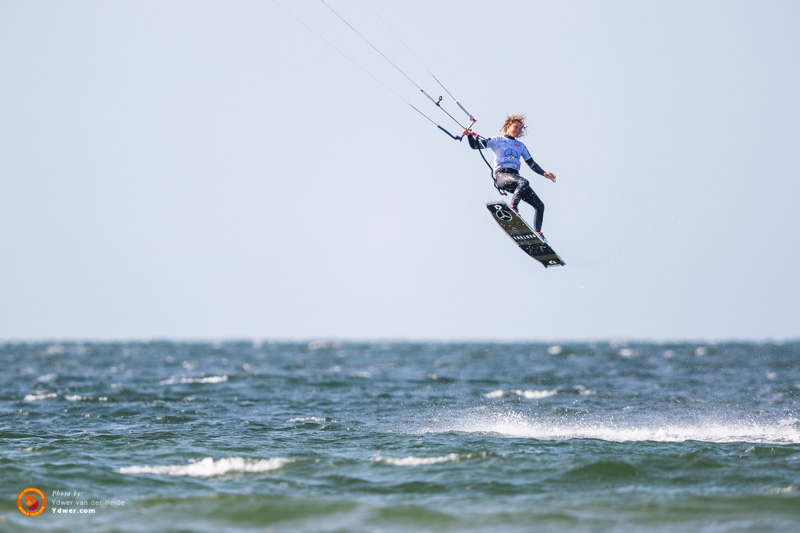 Pippa van Iersel, always up for the battle, will contest the single elimination mini-final tomorrow (The Dutch charger also won the end of the day’s crowd show, the girl’s jet-ski kicker contest!)

Essentially though, if Mikaili wins her semi-final when the competition re-starts tomorrow, she can then afford to lose the single elimination final against Hannah (should the contest then run all the way through the double elimination, the worst position Mikaili can take home from this event would be third). Should Hannah win the double elimination and Mikaili loses another heat (leaving her in third) then they would finish on equal points = 6,234.

At that point the championship would be worked out on count back results and, with Mikaili having taken two event wins to Hannah’s single victory, Sol would win*.

The reality is that Mikaili is an incredible talent for someone so young and has shown no signs of slipping. She has youth on her side with Hannah being literally twice her age, but could that be her stumbling block? Hannah has to hope that not only can Germany continue to be a good luck charm for her results-wise, but that the more familiar, stormy, wet and strong gusty winds that are forecast for tomorrow can see the competition break into the sort of kite-loop and big air territory that we’ve not seen truly come to life as yet this season.

This is also the first event that riders have had to wear full wetsuits and it’s certainly something that Mikaili seems less comfortable with. Hannah fought for all her UK titles in similar conditions…

Here’s how the singles ladder played out. Click to enlarge. 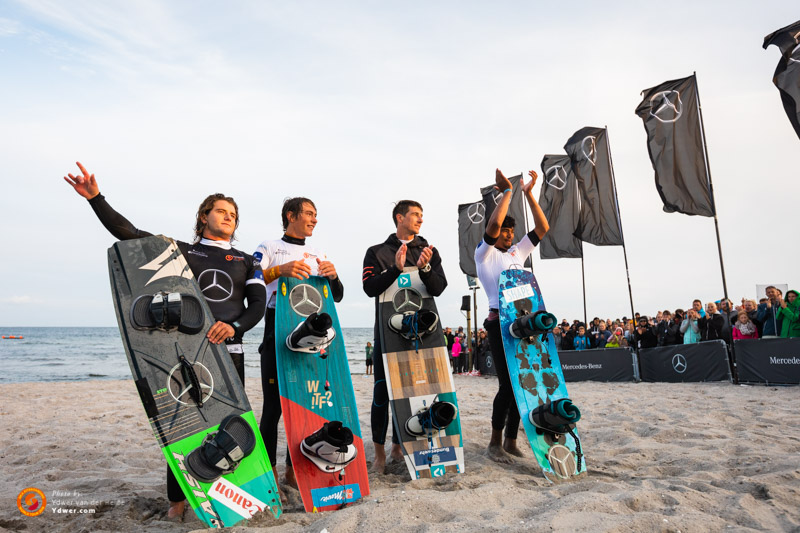 On the men’s side could this switch in conditions play into Jesse Richman’s hands? Marginal tour leader coming into this event, he slipped up to Aaron Hadlow (who’s not in the running for the title) in the semis, leaving the door open for Carlos Mario who claimed a crucial single elimination win on Friday. Having finished third, Jesse needs to win two heats in the doubles to line-up an epic super final, winner-takes-all shootout for the title with Brazilian Mario. 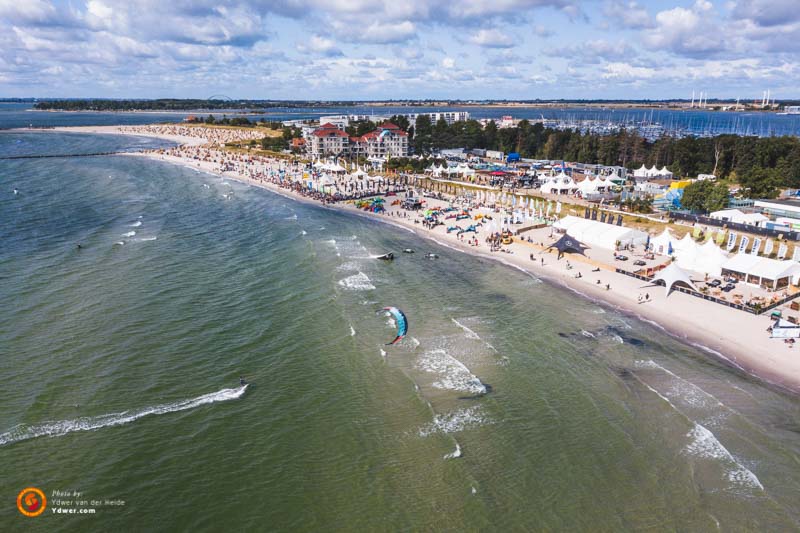 It’s four seasons in a day for Fehmarn this week!

There are still four-and-a-half hours of competition to run before we reach that stage, so skipper’s meeting is at 6am tomorrow with a first possible start at 6.15. Set the alarms and line up the breakfasts for champions!

*NB: There were four events in this World Tour, but the first event in Leucate had no wind for the contest window, so there was no result

Catch up on the men’s single elimination from Friday here.