Saturday 25th June saw the Qatar Airways GKA Awards night with nearly 300 industry  representatives, riders and special guests gathered together at a special red-carpet event to celebrate some of the greatest achievements in kiteboarding, between January 2021 and April  2022.

Presenters Jo Ciastula and Lewis Crathern made for a very entertaining night. The energy was electric, with huge cheers from the audience all night long.

After a survey of the kiteboarding industry to reach a list of final nominees, the public voting phase ran into early June and counted towards 33% of the overall vote. A specialist legends & media committee made up another 33% of the vote and, finally, the GKA Kite World Tour judges and crew cast the remaining third of the vote on the final contenders.

Only the Rookie of the Year award was exclusively voted on by GKA judges and the world tour crew.

WOMEN’S MOVE OF THE YEAR

MEN’S MOVE OF THE YEAR

ROOKIE OF THE YEAR

BEST SOCIAL CONTRIBUTION OF THE YEAR

FEMALE RIDER OF THE YEAR

MALE RIDER OF THE YEAR

WOMEN’S MOVE OF THE YEAR

The first award of the night to be handed out was the women’s move of the year. This award was presented by GKA Kite World Tour Manager, Tom Hartmann. The move of the year nominees showcased all of kiteboarding’s expression disciplines into one awe-inspiring category of action.

The Nominees for the Women’s Move of the Year Award were as follows:

Mikaili is continuously pushing women’s kitesurfing to the next level and her spectacular Slim 7  was by far the best move we have seen by a female rider this year. Not only is Mika the only female to ever pull off this trick but her style and perfect wakestyle execution has no doubt set her in a  league of her own.

MEN’S MOVE OF THE YEAR

Awarded on stage by two-time World Champion from 2002, Mark Shinn.

The Nominees for Mens’ Move of the Year Award were as follows:

Giel Vlugt’s emergence onto the big air kitesurfing scene just two years ago hasn’t stopped him  gaining respect as one of the best big air riders in the world today. Giel’s magnificent S-Loop  carried a tremendous amount of risk factor and technical ability and the 28 year-old ex-kiteboarding instructor (now full time pro) is, without doubt, a well-deserved winner of this award.

“To be here with all these legends just felt insane, I don’t think I have ever felt anything like this.” -Giel

SOCIAL CONTRIBUTION OF THE YEAR

Kiteboarders are a special breed and the contenders for this award were proof of that.

Opinion was canvassed from the industry and a final shortlist of five special people was compiled;  those who have somehow contributed uniquely to the positive influence of kiteboarding in the world.

The Nominees for the Social Contribution of the Year Award were as follows:

SOCIAL CONTRIBUTION OF THE YEAR

Kiteboarders are a special breed and the contenders for this award were proof of that.

Opinion was canvassed from the industry and a final shortlist of five special people was compiled;  those who have somehow contributed uniquely to the positive influence of kiteboarding in the world.

Just 22, Willow is the youngest nominee for this award but this all-round shredder is certainly worthy. The young Mauritian uses his popularity in kiteboarding as well as his drive to run marathons to raise publicity and funds for several ongoing projects, including an early childhood development center in South Africa.

Willow was also a frontline responder in helping clean up the tanker oil spill in the waters off the coast of Mauritius in 2020 and has plans to establish a non-profit.

Willow is much more than just a ‘professional kitesurfer’. Willow has been a part of countless charity ventures and uses his social media as a platform to showcase his fundraisers and encourage people into the crazy world of kitesurfing. The altruistic kitesurfer took the well-deserved win for this award!

The creator and mastermind behind Dirty Habits – Graham Howes is a professional kiteboarder from Cape Town, South Africa, and is known for his stunts mega-loops and relentless riding style.

Graham recently opened up about his personal lifelong struggle with ADHD and epilepsy and a 2019 diagnosis of depression. He has just completed a 30-minute documentary on mental health in

extreme sports and is in the process of launching the Dirty Habits Foundation to help support athletes and inspire social change.

Mitu Monteiro beat the odds to become a Wave Master and World Champion.

Today his primary focus is on giving back to his Cape Verdean community by empowering the local kids to maintain their studies in order to get on the water through his kite center on the island of Sal.

Mitu’s influence on the younger generation and drive to protect the environment make him a well-deserved nominee for the GKA Social Award of the Year.

Four-time British Kitesurfing champion, Lewis is also the only rider to have competed in ten straight Red Bull King of the Air events, while his huge jump over Brighton Pier in 2010 was a career-defining moment.

Beyond all that Lewis has a huge determination to give back to the sport. Through his Wonderful Wind Tour, Lewis visits schools across the UK and inspired and engages students in topics related to the power of the wind. Lewis also uses kiteboarding as a powerful tool in partnership with the Global Wind Energy Council to spread awareness and sustainability messaging.

Brazilian GKA Kite-Surf World Tour competitor, Marcela Witt, has a huge following in her homeland as she’s also a well-known TV personality. As well as being a passionate competitor, Marcela also uses her profile to raise awareness about environmental pressures on the ocean and land that are particular to Brazil.

Willow River-Tonkin was the winner of the Social Contribution of the Year award!

Willow is much more than just a  ‘professional kitesurfer’. Willow has been a part of countless charity ventures and uses his social media as a platform to showcase his fundraisers and encourage people into the crazy world of kitesurfing. The ultaristic kitesurfer took the well deserved win for this award!

ROOKIE OF THE YEAR

The Rookie of the Year award was all about the groms and awarded on stage by none other than five-time World Champion and inspiration to so many, Aaron Hadlow. The aim of this award was to celebrate all the amazing young talent that’s coming up through the competitive kitesurfing ranks.

The Nominees for rookie of the year award were as follows:

Doing it all, from freestyle to big air, surfing to winging, this 12-year-old is already a jack of all trades, master of all! His progression has skyrocketed over the last few months and we are excited to see what’s to come of this kitesurf prodigy.

RIDER OF THE YEAR AWARDS

The final, most prestigious award of the night; the one that everyone had been waiting for.

The Rider of the Year is not simply an award for World Champions, it’s about the riders that pour their heart and soul into the sport. The search was on for riders who achieved something really  unique, or those who have inspired huge amounts of people.

The nominee list featured riders who push, achieve, and love kiteboarding. The GKA decided to combine the diverse styles in kiteboarding into one award… which obviously wasn’t easy for anyone to call!

The Nominees for the female rider of the year award were as follows:

17-year-old Mikaili Sol is, without question, one of the most talented riders the kiteboarding world has ever seen. Her progression has been unmatchable by any other rider as she pushes women’s kitesurfing to the next level! Not only does Mika put in hard work on the water but she also works very hard for her sponsors and puts in a tremendous amount of effort on photoshoots and projects.  We look forward to seeing what more Mika has to offer in the future, after also claiming her fifth world title after these awards at the Qatar Airways GKA Big Air World Championships!

MALE RIDER OF THE YEAR

Following his Move of the Year win, this second award crowned a really special night for Giel  Vlugt. Not only is this Dutch powerhouse a truly tremendous athlete but he is also a great representative of the sport, always showing up for everything with a big smile on his face! Since bursting onto the scene a little over two years ago, his relentless progression in the big air scene has fuelled an overall raising of the bar in that discipline. He has helped showcase the truly radical nature of kitesurfing to the world and is the well-deserved winner of this award.

As a special bonus, both the Rider of the Year winners also received two business class return tickets each to Doha, courtesy of Qatar Airways, where they will have the chance to visit the brand new Fuwairit Kite Beach resort that’s opening in the autumn!

Nothing beats the feeling of a powered dangle ...

@maxime_chabloz back to a freestyle office ...

Doubles with @marcjacobskite! With a different ... 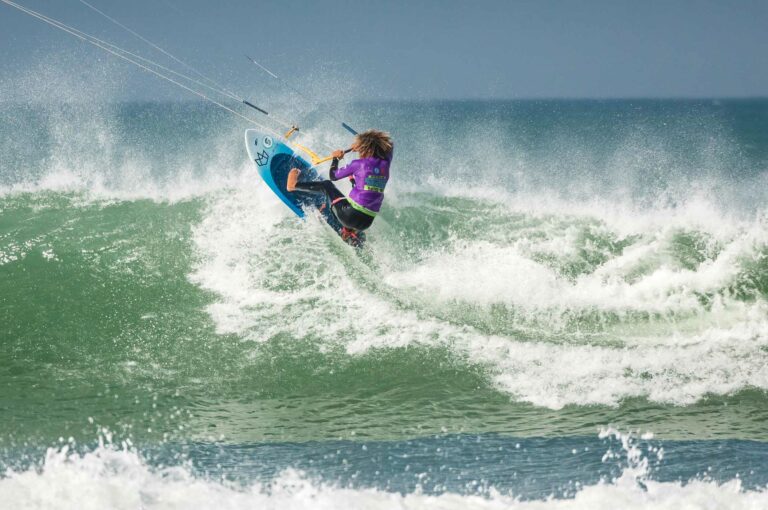 As the tour approaches the exciting final stages of the 2022 season, find out about the upcoming events that will deliver the champions 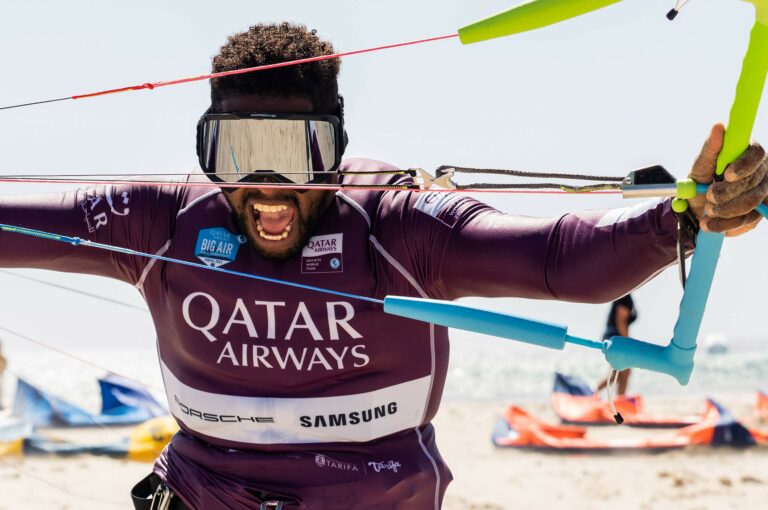