Find details of Airton’s win here, and more insight into how Sunday’s heats, from the quarter final stage onwards, played out below.

Keahi is committed to a certain look and feel in his riding, he’s never dangling under his kite and we never see him do a rodeo (board between his legs). So all his kite loops are one handed with his board in the other hand. He also has one of the most stylish, stalled stalefish back rolls off the kicker and we can often hear the landing stomped from the beach.

Camille wasn’t riding with the same consistency as the previous rounds and kept dropping all his technical board-off manoeuvres, while Keahi steadily racked up his regular moves, including his unique air reverse that has a huge shifty at the beginning. Camille eventually got into his stride and upped the intensity to his regular levels; bearing away hard downwind, building anticipation as he launches off a kicker. He just about stuck a front roll shuvit in the final seconds, but in the end Keahi had the heat under control with more variety and overall impression.

Simon Joosten has style and all the riders are quick to complement him for that. Having despatched Keahi de Aboitiz as early as round three in Tarifa, the Barbadian is a big improver this season. Within a few minutes of this heat beginning, Simon’s challenge was to find a bigger trick or a new combination as Matchu’s trick bag is deep and he was evidently on form. As both riders’ kites bellowed and bowed in the wind, rocking back and forth in the gusts, Matchu was still able to pull out his Superman back roll (both hands on the board with it out in front of him) and a double front roll with a 180 shuvit. His tricks this heat weren’t his biggest, but he scored all 9s for technical difficulty, variety and overall impression, whereas Simon was hovering around the 7s.

Paulino is a highly emotive rider. As a spectator you go on a journey with him as he takes off. By trade he’s an aircraft mechanic in the Portuguese army and it’s clear that he juices up on aviation fuel before heading to GKA events! His back rolls are big and aided by one of the fastest kites in the industry, the Ozone Reo, and Paulino redirects his kite hard across the window a couple of times just after take-off to get lots of lift and forward travel, whipping it round the back of the window as he sets his landing gear down. He rescues situations in the air that look untenable, which is why he’s so popular for the fans. Mitu hasn’t been looking himself out here at Sotavento, but he’s grinding out results and although Paulino landed some nice big kite loops variations, in the end Mitu went through with just a fraction of a point more for technical difficulty, having landed double front and double back rolls, too.

The kickers suddenly jacked up at the start of the heat and with the biggest challenge in front of him, Gustavo launched into one of the biggest jumps of the contest… but just lost his board on the climb, losing him precious seconds to bodydrag back to it. He eventually got into gear with some big front rolls and rodeo kite loops, but meanwhile, Airton was off: air reverse 3, board 360, double back roll, rodeo kite loop and a huge back roll tick-tack (spinning the board rail to rail in his hands) – all within the first couple of minutes. His assurance is awesome and he’s so in tune with his kite. When he does his big kite loops on the inside he boosts, takes the board in his front hand, lets the kite lift and then sends it so severely that you can then hear the kite shudder as he sheets out super aggressively as it climbs back up the window just before tucking the board under his feet again. Airton went for 18 tricks in this heat and stomped 65% of those, including a quadruple back roll rodeo and almost sticking the boogie loop that has evaded him so far this contest. His scores were 9.5, 9.5 and 9.7 for tech, variety and overall impression!

Matchu started at pace with consistency, registering a double front, Superman back roll 5 and a triple back roll. Keahi missed his usually standard front to blind and stalefish back roll and was unlucky not to land a big tick-tack back roll when his landing was hindered by an unusually big breaking bit of white water. The wind dipped a bit in this heat, but Matchu had 21 tricks attempts in this heat, successfully including a front shuvit and a back roll board-off which he transferred into a rodeo and a tick-tack. Juggling skills! He averaged 8.77 for the three judging categories with Keahi down in the 7s.

Airton crashed a front shuvit in the first few seconds. He may be dominant, but the speed he does his shuvits at are always running the risk of injury. Within a few moments he was back with a front to blind with a 180 reverse, nice stalefish front flat spin and the most beautiful back roll tick-tack and managed to land on a wave, carved into it and away from it and nonchalantly popped an air reverse on the wave in the shorebreak. His artistry and instinct are hard coded in with an insane trick landing ability. Mitu was improving and stuck a nice front roll shuvit and his version includes a really unique pump of the board up and into wind as he spins it through 360 with his feet as we watch it come back to him like a boomerang! Mitu lands some technical board-offs, but his control is a little less fluid. As Airton’s win was announced and with a break for lunch ahead of the finals, Airton stayed out on the water shredding the shorebreak, which was beautiful to watch. (And as the beach cleared, he set about practicing his triple back rolls and triple tick-tack board-offs!)

The wind was up again for the mini-final with both riders on 8s. Mitu looked hungrier early on, almost landing a double front shuvit and continued to focus on more technical variations. Keahi nailed three tricks within 100 yards on two tacks, including a toe-side front roll to blind, a shifty air reverse and his big stalefish back roll. Mitu snapped his board half-way through the heat and although he landed a nice front roll one footer on the inside, Keahi is the ultimate competitor and had logged several tricks on his port tack out the back including a nice front roll shuvit, which he hadn’t had much joy with up to then. 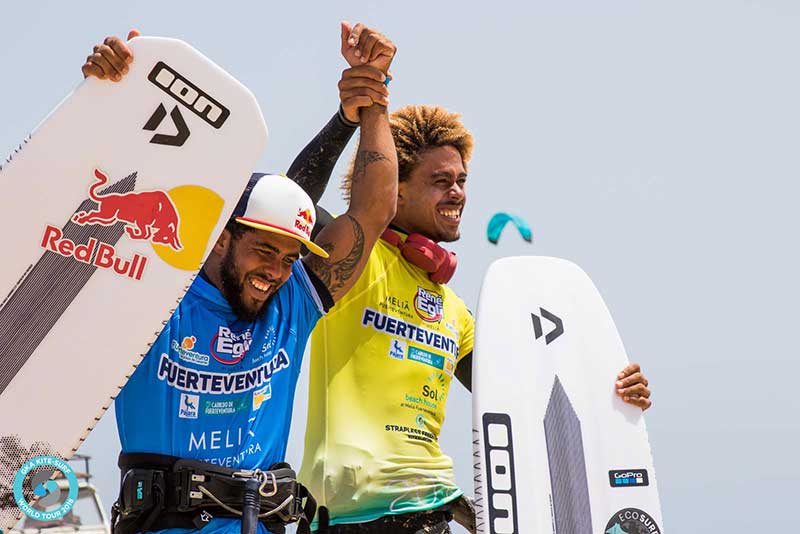 I can’t recall a pairing (who regularly face each other in the final stages of a tournament) in the same sport with such contrasting styles and approaches. Matchu Lopes needs a release valve to maintain his flow. Airton is wired differently and requires a constant current running through his body.

As the horn blew for the end of the mini-final, the finalists leaned on the heels and angled their bodies into wind, entering the water in front of the crowd to big applause. Each taking their bow before heading out, they crossed paths with Keahi and Mitu who oppositely took their applause, waving graciously to the spectators on their way in.

The first minute of action was fairly even, with a front roll from Airton and a front to blind from Matchu. Airton then laced his front to blind with a 180 reverse and then a double back roll transition before a big board-off kite loop with a stalled heli loop and clean landing.

Matchu was firing early on too, landing an interesting variation of a front toll into a rodeo before board 360 and landing blind.

Both then went for a triple back roll, but failed, however within seconds Airton was airborne again with a huge back roll double tick tack landing toeside! So new, but so clean. For the rest of the heat Matchu stayed out back and was tripping on his usual tricks. Coming inside he crashed a front shuvit and puffed his cheeks as he tacked back out. Airton was ramping up, nailing a front shuvit and a big back roll rodeo before finally landing the boogie loop (a front roll with sent back kite loop) that he’d been longing to stomp first, but was just beaten by Paulino yesterday.

Airton scored three 10s for technicality, variety and overall impression – a GKA first! The heat ended as described in this report, but big props for both riders, who massively respect riding with each other and it shows.

Catch up on the full 2018 KSWT season rankings here, with two more events to come in Brazil in November and Australia in December. Airton has extended his lead at the top, while Matchu has moved level on points with Mitu in equal 2nd!