Good morning from the nuking shores of Tarifa! The wind blew the riders into action right away as the riders began to set up their quivers and were blasting their zone-in playlist upon arrival.

We promptly picked up right where we left off, planning to power through as much of the ladder as the conditions allowed. Based on yesterday’s feedback from the riders, the judges have decided to thread the women’s heats between the men’s, intending on preserving all of the athlete’s energy throughout the day to ensure their best performance. Although the wind was nuking beyond expectations, bearing in mind this was a Freestyle competition the judges tried to maintain the Freestyle element as primary as they continuing into the Mixed format applied the previous day ( 7 trick attempts, best 4 counting: 2 Freestyle 2 Big Air tricks).

“We will adapt to you, giving you more time based on the conditions. We are open to feedback about the new mixed format, and insist on open communication between us.” – Emphasises Juan Antonio (Race director) in the first skippers meeting. The Judges are doing their best to give freedom to the Riders as they introduce this new format into the tour.

“Make sure you focus as much as possible in every category (Technical difficulty…). We are looking for the most complete rider; Quality over quantity. How much you stretch, how much you rotate, how much you grab, how much you tweak out. We really focus on the individual element, so express yourself to the fullest.” – Alvaro Onieva (Head Judge) 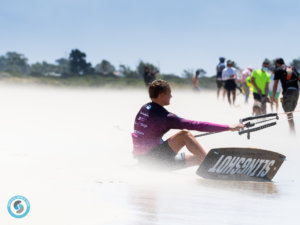 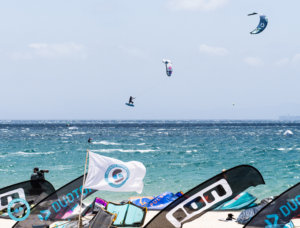 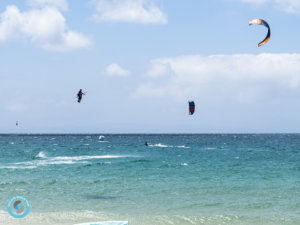 The first riders on the water struggled with the outrageously gusty conditions on the inside as the wind continued to settle in. Although wind chop provides epic ramps, let’s not forget that landings can be pretty gnarly in these gusty choppy conditions. But it’s all part of the game in separating the best from the rest! Timing tricks are essential, these experienced athletes know how to ride the gusts and avoid the gust riding them.

Nico Franco (ESP) and Robin Goetgebeurg (BEL) had a particularly tough time in the first heat of the day. The gust must have blown Franco’s confidence we experienced the previous day out of his system as he failed to land any of his tricks! Lorenzo Calcano (DOM) managed to keep his head together as he landed 5 of his 7 attempts relatively smoothly. France must have prepared Julian Krikken (FRA) well for these conditions as he managed to pull most of his tricks with that extra ‘umf’ he needed to score the winning points.

There was nothing stable about the conditions of the shores today. The wind began gusting beyond the pro’s anticipation and the spectators were in between excited and nervous, as they attempt to keep their eyes open with the blasting sand storm. We experienced an undeniable difference in scores from the previous day. As the battlefield became gnarlier by the second, the battle shifted from in-between warriors to between the warriors versus the gusts! By Round 3 the Judges called the riders into a skippers meeting to adapt the criteria to the dominating Levante, leaning more towards Big Air favored elements.
New rules: 1 Freestyle 3 Big Air tricks.

But that didn’t last for long. The conditions continued making it extremely difficult for the riders to claim the stage with their Freestyle moves. The locally loved Manu De Pfyffer (CHE) wasn’t even used to the Strength of the Levante we experienced on the shores on more familiar to the training grounds in France than his very own shores of Tarifa. They are appearing to be more familiar with the training conditions our French riders have experience in, Arthur Guilbert (FRA) confirms with his performance, winning the points he needed to push him to the next round.

The gusts made it extremely difficult for the riders to claim the stage. By heat 7 we had been blown out of the purple zone to the stratosphere! With the wind now gusting beyond measures, the judges decided to adapt the rules once again, completely blowing the remaining elements of Freestyle out of the focus. This is primarily for the safety of our brave competitors!
New rules: PURE BIG AIR! 3 Big Air tricks count in the final score.

Due to the extreme conditions, the judges decided to restart from heat 7, cutting the riders some slack, giving them another chance to adjust to the pure Big Air format. Scores were getting higher as we climb our way up the Ladder into heat 9. The conditions weren’t getting any easier, but the riders did an incredible job adjusting to them each time they were out on the water.

The Dominican Adeuri Corniel really dominated the scene in heat 7 showing immense confidence in this new format with his Kiteroll Frontroll Board off. That was enough for him to claim him Heat 7 by 6 points and boost him to the next round. In the following heat, the French Riders prove to be used to these conditions once again, as Paul Serin (FRA) smoothly landed all 7 trick attempts and managed to spice it up with a Kiteloop Backroll spinning the judges head towards him. I think our local boy Jerome Cloetens (ESP) must have seen that as he answered back with a giant Kiteloop Frontroll scoring a high score of 8.53! Unfortunately, it wasn’t enough to boost him to first place.

In the next heat Legendary Tack (BEL) was back, but he wasn’t as stoked on today’s conditions as he was yesterday. Recently he’s been using his smaller kites for waves, apparently, it’s been a while he rode in these conditions. Unfortunately, you could tell he wasn’t having as much fun on the playground as he was in his previous game. Valentin Garat (FRA) on the other hand has clearly been using his smaller big air kites and boards with straps regularly, as he showed us with his solid Kiteloop Board-off spinning him off into the next round! 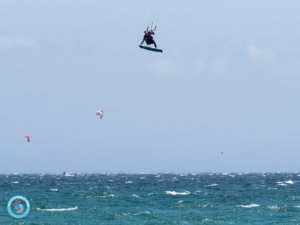 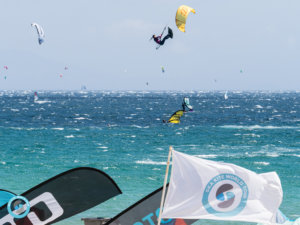 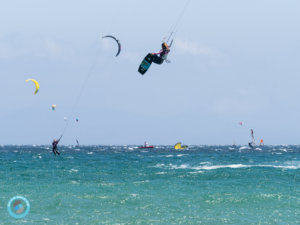 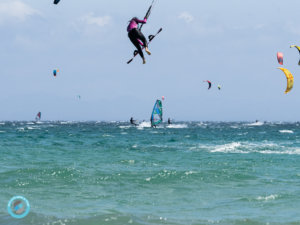 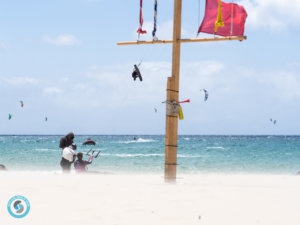 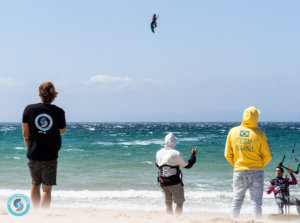 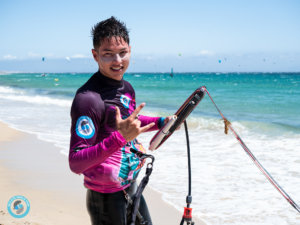 Looks like the last-minute call to enter the event have paid off for Oswald Smith (ZAF) today. He was perfectly boosting up and above the judge tower pulling a massive Kiteloop Backroll to show the spectators in the beach bars what they’re missing out on down on the shores. Master of Mischief is causing some serious havoc on the nuking shores of Tarifa as continued to show us what the big air is all about. He scored 18.7 points and claimed the highest heat score of the day.
Unfortunately, Garat couldn’t top Smith’s experience in gusty shores of Capetown with those of France this time. He executed his tricks nicely, however couldn’t quite obtain as much power as Smith, leaving him in 2nd place with a total score of 9.48, Corniel falling 2 points behind that.

That spurred the Women straight into the action as they head out to the battlefield after that. Claudia Leon (ESP) rode that excitement straight into the water, kicking off the women’s division with a banging total score of 15.08!
Pipa Van Iersel (NED) right behind her, doing her best to throw her tricks in these hectic conditions! Unfortunately, Katie Potter (AUS) couldn’t quite keep up with these two warriors in this battle.

Following that Nathalie Lambrecht (SWE) faced intimidating Kajiya (BRA) unfortunately only managing to land one of her tricks. This made it easier for Kajiya to wipe her out of this round fly up the ladder. Heat 5 was a thrilling one, as our three queens Rita Arnaus (ESP), Paula Novotna (CZE) and Hannah Whiteley (GBR), all known for pushing the girls level higher put on a show!

Novotna struggled to capture the Judge’s attention enough this time, as Whiteley whipped out that power she had been building up in all of her moves. Unlike most of our riders here, it was the purple forecast that brought her back to this battlefield. Rita demonstrated how the off-the-water training really pays off with her massive Kiteloop Backroll scoring a high 6.6. But it was Hannah’s consistency in powerful executions that gave her what she needed to progress to the next round.

Mikaili Sol (BRA) our youngest Woman on tour wrapped up the Women’s action for the day, once again demonstrating that there was no age limit for sending it. Her first time on the water of the day, she warmed up with her first two trick attempts. By the thirds and fourth, you could tell she was comfortable, but no one was ready for her HUGE Frontroll Board off she had been keeping for us in her back pocket scoring a solid 8. These riders really lived up to the local meaning of their names in today’s performance.
Although fellow Brazilian Estefania Rosa (Rose) sent a sweet scent to the shores throughout the heat, Sol (Sun) burned too bright for Rosas flower to fully blossom, taking home the highest scoring heat of the day for the women, as the judges release them for the day.

Joselito Del Rosario (DOM) spurred the last round of the day into action with an outrageous Kiteloop Backroll, but Lucas Pitot’s (FRA) kept his game on point as he answered back strongly with all of his tricks, scoring the points he needed to take home heat 14 with Rosario & Krikken closely falling on his tail.

Just as we were thanking the lucky stars we hadn’t experienced any injuries, Manu Defyffer made us bite our young & hold our breath with the beating he took in the following heat.

A nasty gust boosted him up and completely left him hanging mids air as he attempted to pull his Kiteloop Backroll. This sent him crashing down and his friends & families running to the shores to assist the beaten-up rider. Luckily, De Pfyffer’s ribs survived, but the warrior left the water winded and defeated. It was Luiz Alberto Cruz (DOM) that took home heat 15 with his last trick with his Double Sent Past sending him to the next round.

After De Pfyffers’s scare, the judges decided to call off Heat 15 and send the riders home for the day as the conditions simply became too risky. The sandblasted warriors were quick to pack up and head back for a well-deserved rest after the intense battle they persevered through today with the conditions we experienced.

Judging by tomorrow’s forecast, they will need all the rest they can get. I can guarantee you they will all be mentally preparing over the night for the rough day ahead of them.

We’ll be meeting back here early Friday morning with a first possible start scheduled at 10:00 am (CET) sharp, rested, and ready for another day of nuclear action.

Don’t forget to show the warriors some love and appreciation for today’s entertaining hardcore battle!