Following on the amazing Freestyle-Finals that ran on Taiba lagoon earlier this month, now it’s the turn of the Kite-Surf and Hydrofoil-Freestyle riders to decide their World Champions.

The Kite-Surf action got underway with three man heats in round one. The first four minutes were dedicated to freestyle tricks before the final eight minutes of each heat were all about wave riding.

Time and again we’d see more regular tour riders leading with their strapless-freestyle tricks, but then the local Brazilians would really turn up the heat and come through to take the wins with super fluid and action packed wave riding in what developed into more tricky conditions as high tide approached.

Star riders shining in the opening Kite-Surf session were Brazilians Gabriel Benetton, Artur Morais, Leonardo Grangeiro and Wesley Silva, among others who progressed to meet the higher seeded riders in round three.

Round three also got off to a brief start. Pedro Matos and Matchu Lopes won with their usual fluidity and flair, but locals Artur Morais and Wesley Silva were relentless once again… this time against quality world tour opposition! They are now directly into round five.

See all heats, eliminations and other Kite-Surf competition info here.

As the tide pushed super high and conditions became less and less suitable for the wave riders, the focus switched to the Hydrofoil-Freestylers to complete rounds one and two.

Suddenly, the action was all about big airs, spins grabs and even handle-passes.

No doubt trick of the day went to Alex Soto who was reliving his freestyle competition days of the past, with a massive unhooked sent front mobe, for 7.77 points. Maxime Chabloz also threw a big dangle-pass, and hinted he may have a double in his toolbox for tomorrow!

Australian Ryan Parsons had a really eye-catching, slashy style and is also through to round three.

There was just one heat in round two and that brought an end to the day’s action.

Be sure to join us tomorrow as the current World Champions in both disciplines enter the competition. 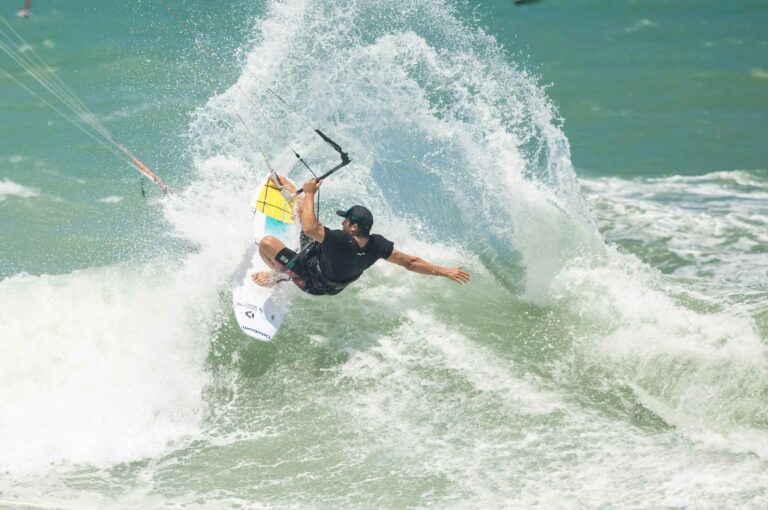 Now it's the turn of the Kite-Surf and Hydrofoil-Freestyle riders to decide their World Champions in Taiba, Brazil!