Thursday was another stacked day of competition with the riders who’d dropped out of the running during Wednesday’s single eliminations back in action in the double eliminations – their second opportunity to climb back up the tables.

If you’re not familiar with this format, it doesn’t mean a total rerun of an event – the winner of the singles is already in the final, the runner-up is already in the semis, and so on. However, it does give any rider the chance to make a heroic surge back up the ladder like Jalou Langeree did last year in Mauritius (almost making the final in the process). 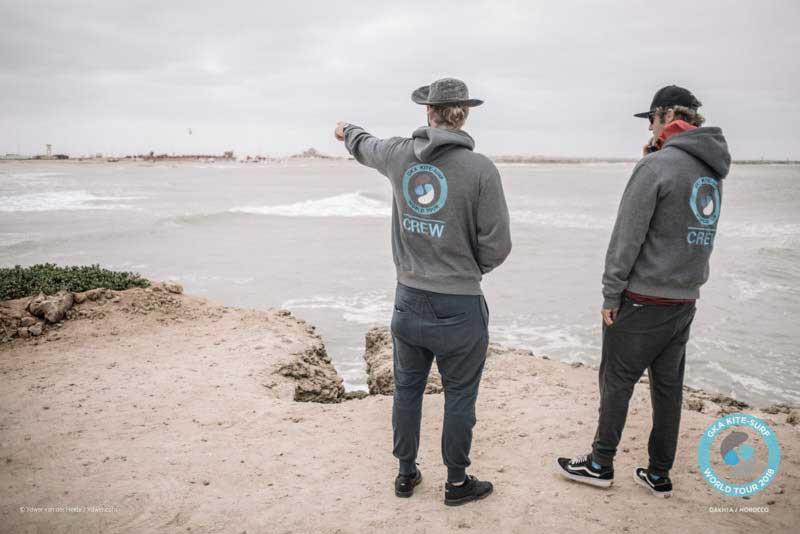 They would be judged on a split criteria again, this time 60% wave riding and 40% strapless freestyle due to the shifting conditions which were seeing competitors in some heats searching for waves while in other heats riders were scoring set after set. This would allow them to rack up points for their strapless freestyle ability if they hit a flat spell. Good news for some, but not for everyone as not all the riders on tour have spent a great deal of time focusing on their strapless freestyle riding before this season. 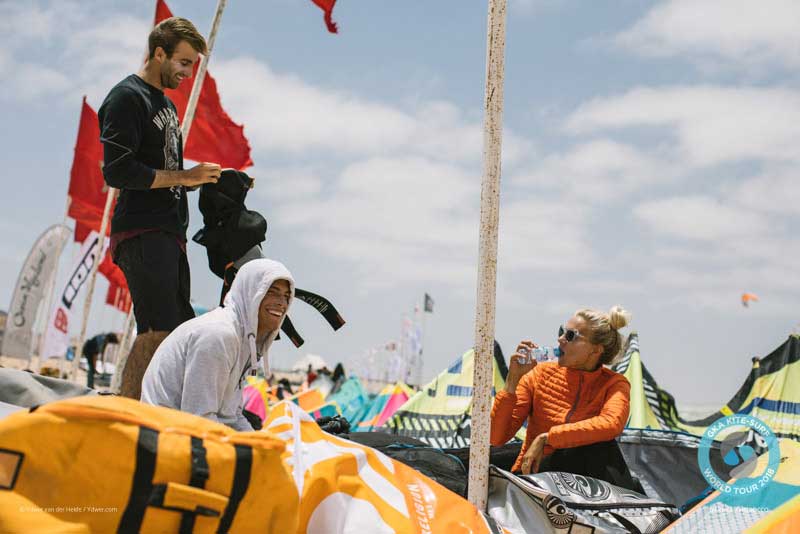 The men headed out first, and the early rounds consisted mainly of Moroccan riders who were using their inside knowledge of the wave at Foum El Bouir, this spot’s official Moroccan name, to great effect. 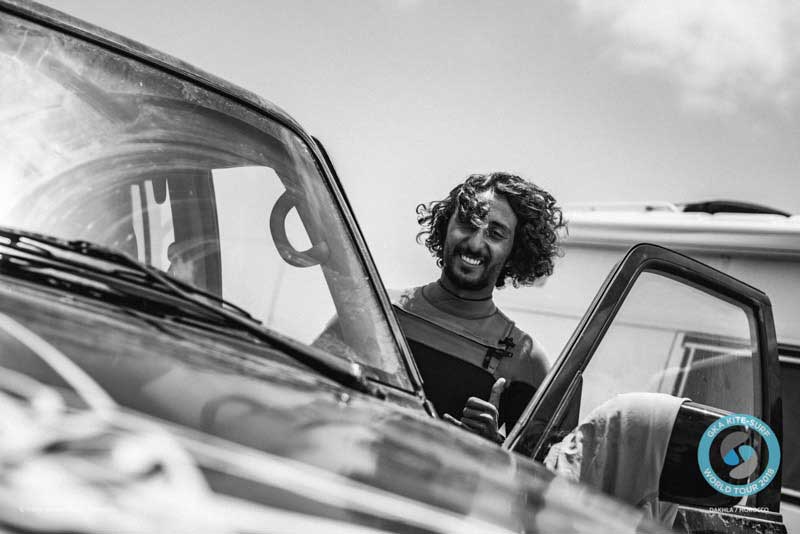 Things quickly went up a gear though when the riders who’d crashed out in round three and the single elimination semis hit the water. Strapless freestyle ability became a must to progress through the heats. 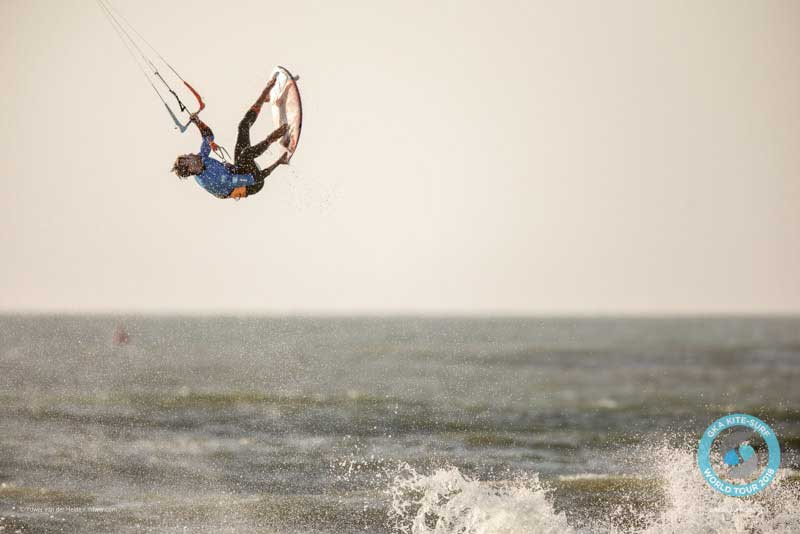 The wind was beginning to ratchet up a level by this stage and, as the women’s rounds began, riders were having to make snap recalculations about kite sizes before heading out for their heats. Some tight battles saw the women’s field whittled down to just four remaining riders who’ll go on to face the current top four tomorrow – Jalou, Moona, Ines and Carla. 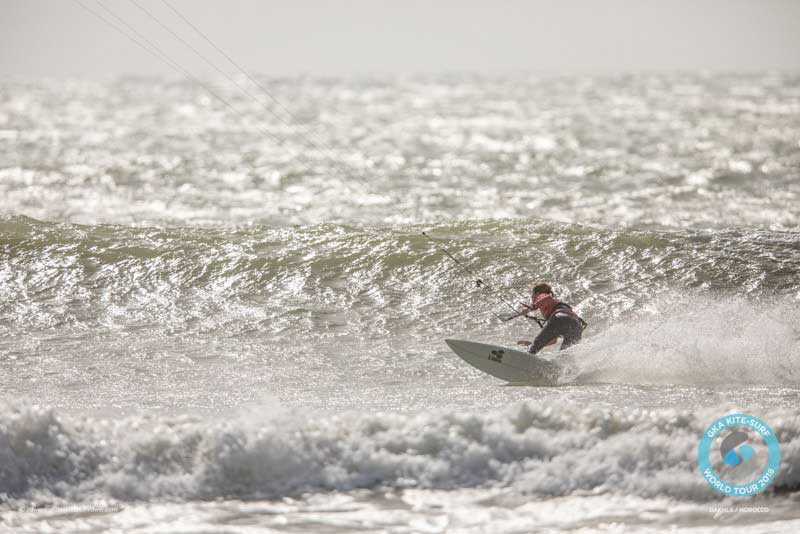 One of the key performances came from Hawaiian rider Olivia Jenkins, who recently became one of the first female kiters ever to ride Jaws, and she looked very comfortable in these conditions that required commitment and adaptation to make the sections count.

Until now, few of the women have been training their strapless freestyle on a regular basis but that’s starting to change already on this year’s tour and special mention should go to Johanna Catharina Edin who valiantly trucked into a committed backroll attempt before succumbing to Dakhla-based British wave riding heroine, Kirsty Jones. 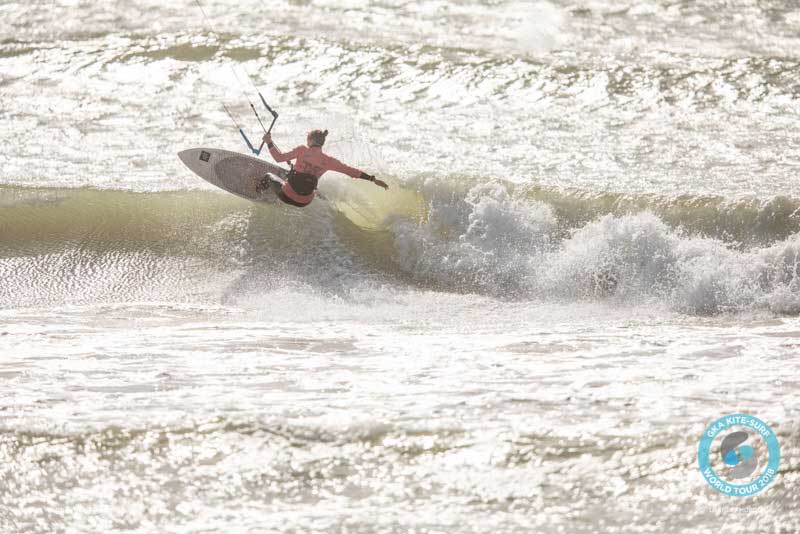 JC had a tough heat against Kirsty – but it was close! / Photo: Ydwer van der Heide

After that, it was back into the men’s action and the closing heats of the day were perhaps the best of the event so far. The riders who competed in this round are some of the strongest in the division, and many of them have been on podiums at previous GKA KSWT events before now, so with some of the best waves of the day starting to roll through we were in for a solid sunset showdown. 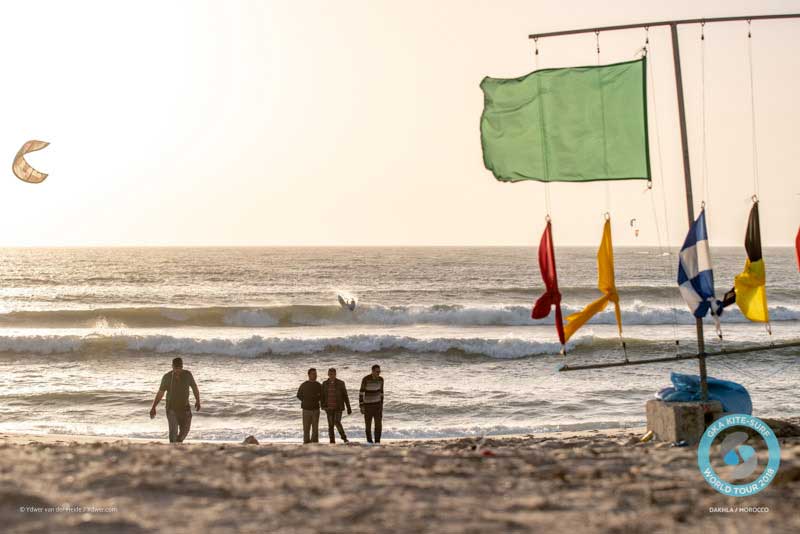 Flags go up as the sun starts to go down / Photo: Ydwer van der Heide

DR rider living in Tarifa, Jan Marcos Riveras, and Australian James Carew went head-to-head in one of the closest heats of the event so far – Jan Marcos the veteran versus young up-and-comer Carew. James pushed Jan Marcos all the way, and it’s clear his strapless freestyle level has improved, but Jan Marcos was getting the best waves of the heat (and perhaps of the day!) and was putting much more amplitude behind his strapless tricks and the win was deservedly his. 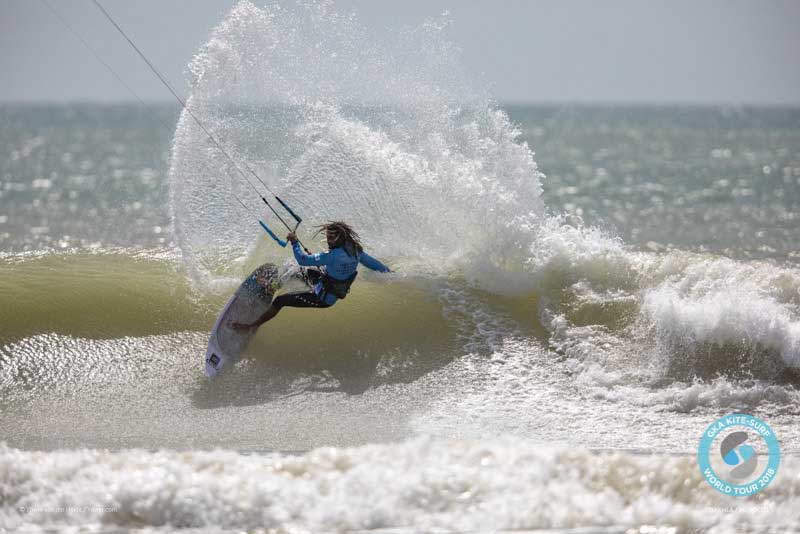 If there was a ‘rider of the day’ award it may well have gone to Jan Marcos Riveras / Photo: Ydwer van der Heide

It was a big moment for Jan Marcos. He’d had to battle through quite a few heats to get to that point but he was a standout rider of the day and he’ll be hoping to carry that momentum on to tomorrow into the final rounds of the main event.

Then came a massive heat between hard-chargers Paulino Pereira and Ralph Boelen which was, again, seriously tight and it could have gone either way between these very well-rounded competitors. However, as the buzzer sounded Paulino was already dropping into the best wave of the heat and he rode it to completion, surging hard at the lip to seal the deal over Ralph. 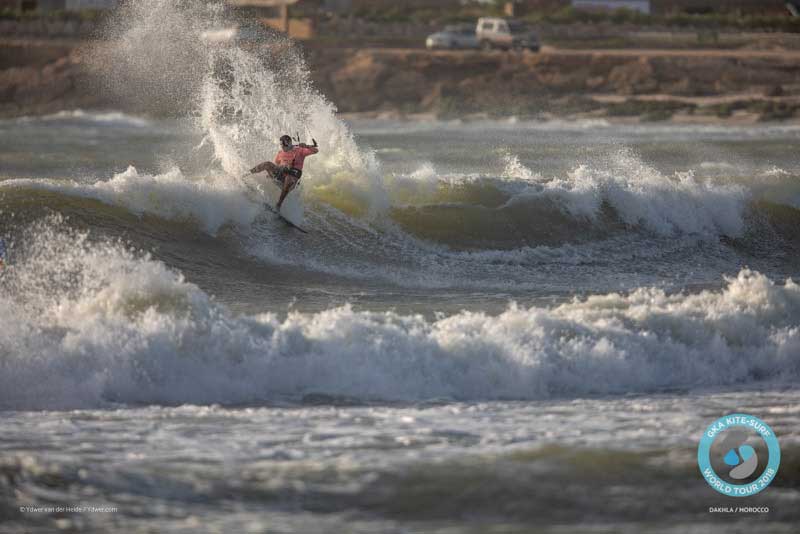 The sun was going down by the time Camille Delannoy and Sebastian Ribeiro met in the last heat of the day and it was to be a big one! Camille is a very accomplished strapless freestyle rider, and his wave riding level is rising rapidly right now, but Sebastian’s wave knowledge and understanding was hard to beat and when he managed to stick a clean front roll and a shuvit (both tricks are quite new to his repertoire) in the last minute. The deal was done, Sebastian had done it and was through to the final eight. 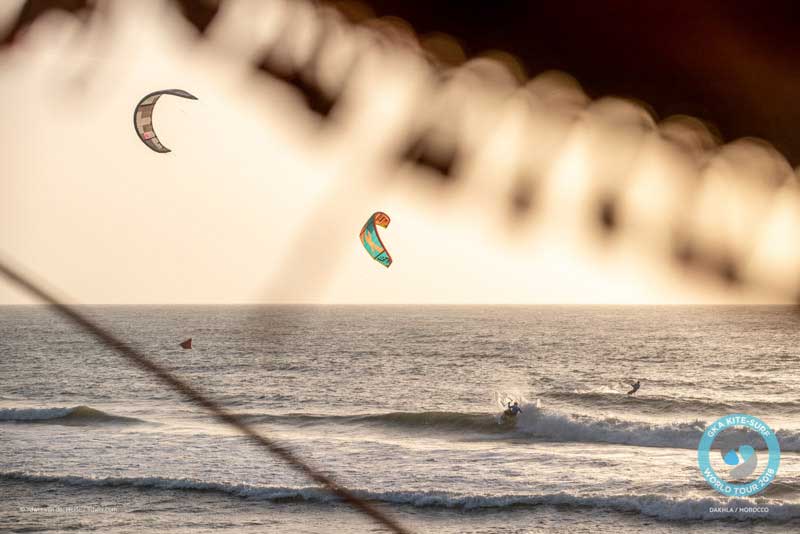 The riders finally left the beach as the sun set on yet another heat-filled day in Dakhla and all eyes are now on today (Friday) when the final eight riders in each division will battle it out for the podium places.

Jalou Langeree will be giving no quarter in her bid to defend her current first place position and Airton Cozzolino, who was on the water all day today practising at the Foum El Bouir point break, is going to be a tough man to beat as well. That’s not going to stop anyone trying to take him down though!

HERE’S HOW THE DOUBLES HEATS PLAYED OUT – JUST 8 RIDERS REMAIN IN BOTH COMPETITIONS:

If you’re not sure how the tour tables look right now then check out the top fives below and head to our site for the full GKA Kite-Surf World Tour 2018 rankings.

STAY TUNED TO OUR SOCIAL MEDIA FEEDS FOR REGULAR UPDATES TOMORROW AS WE HEAD INTO FINAL ROUNDS OF THE DOUBLE-ELIMINATION!