THE FIRE IS LIT AT FOUM EL BOUIR

The GKA Kite-Surf World Tour riders rolled into Dakhla late Monday night on the eve of the second tour stop of 2018. A core contingent of riders has been in situ since early last week, tuning in to the conditions and preparing for this event that will see Airton Cozzolino and Moona Whyte taking on all comers as they battle to defend their overall tour leads. 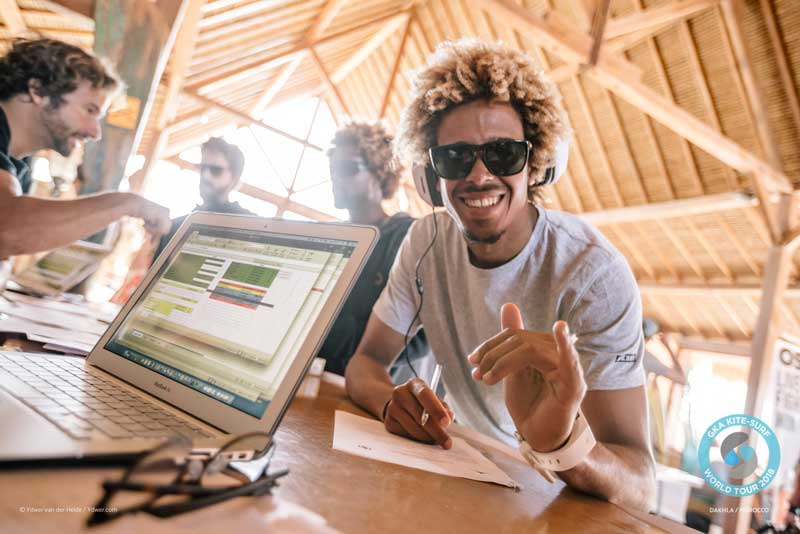 Not deterred by his unfortunate early exit at the last event in Cape Verde, Matchu Lopes is fired up and ready to go / All photos: Ydwer van der Heide

Airton and Moona took their top spots two months ago in Cape Verde when the tour kicked off at another storied right-hander, Ponta Preta, but the point margins are slim and a number of riders will be eyeing their positions this week in Dakhla and pushing them all the way. 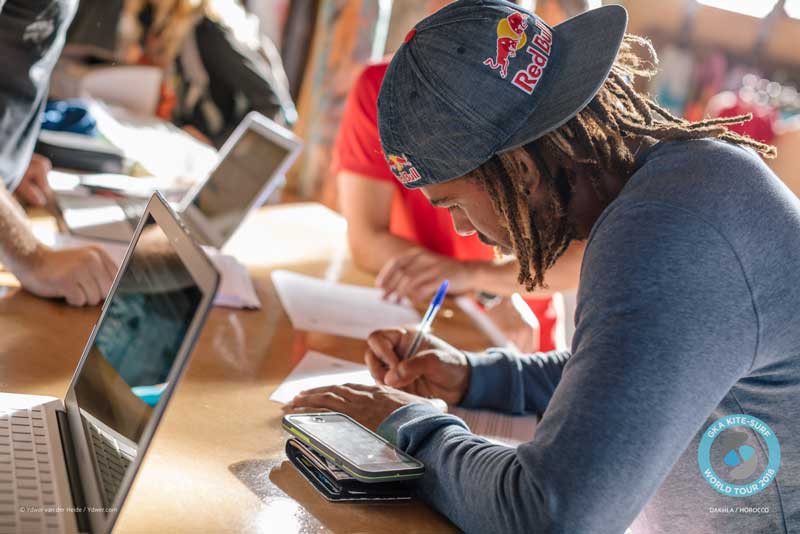 Although many of the riders were still shaking off jet lag having travelled from as far away as Hawaii and Southern Australia, it was straight into registration at the Westpoint Dakhla Hotel yesterday morning where 48 riders registered for the event. 34 men and 14 women signed their names on the dotted line, making this the most well attended GKA event yet in Dakhla with the biggest field of female competitors ever at a GKA KSWT competition! 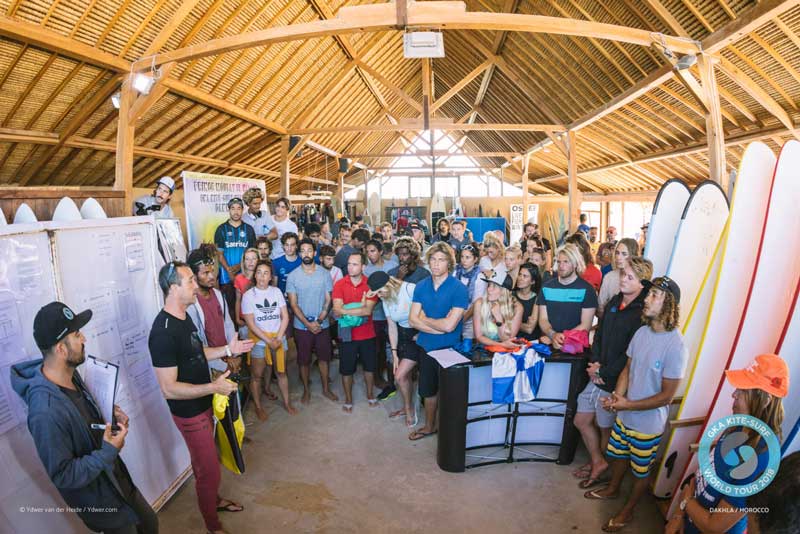 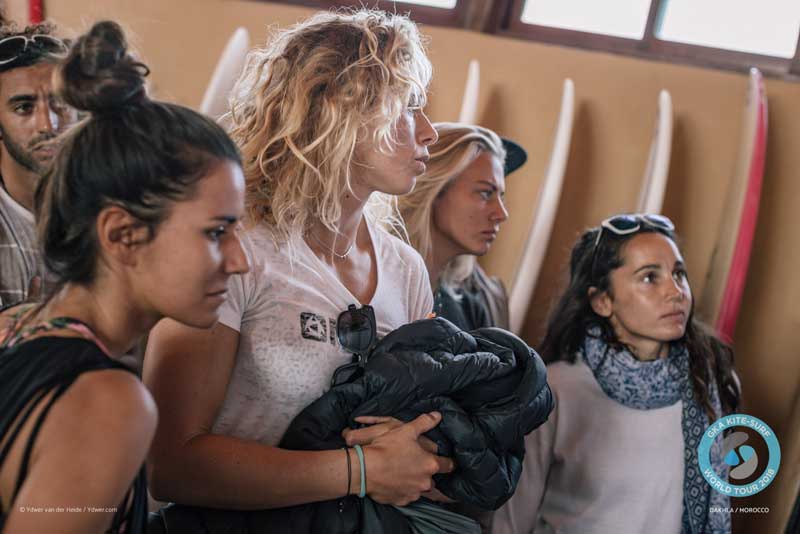 Conditions for the week ahead look promising too with strong wind predicted everyday until the end of the event window on Sunday. The wind was pretty patchy yesterday, so conditions weren’t quite up to the required standard for competition, although an attempt was made to start men’s round one. Many of the riders hit the water anyway to get a surf in before kiting the point break here at Foum El Bouir when the wind filled in later in the day. 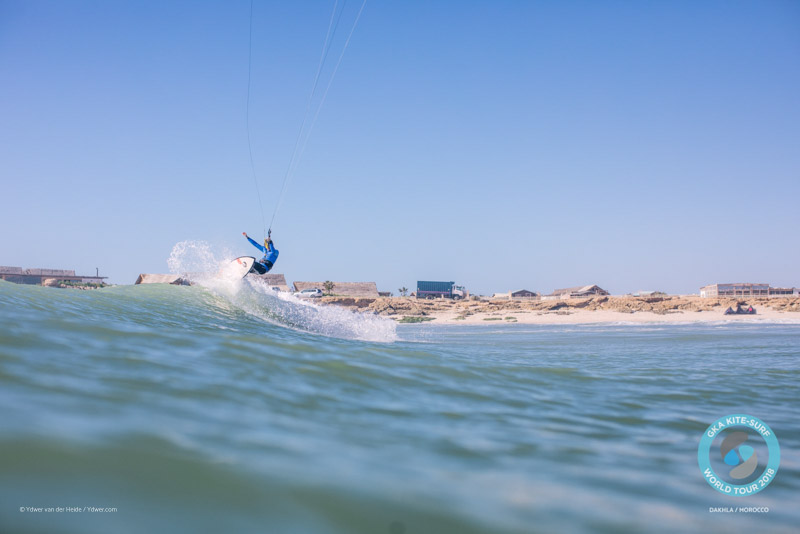 Keahi cracks one of the top in the light wind glassiness

This allowed them to get a feel for the spot and Keahi de Aboitiz (four times a winner here) was looking dialled and supremely focused. He never shifted from the peak, relentlessly racking up wave after wave, and it felt as though he was perhaps signalling his intent as Airton, who beat him in Cape Verde, watched from dry land before heading out himself to join Keahi and the others. 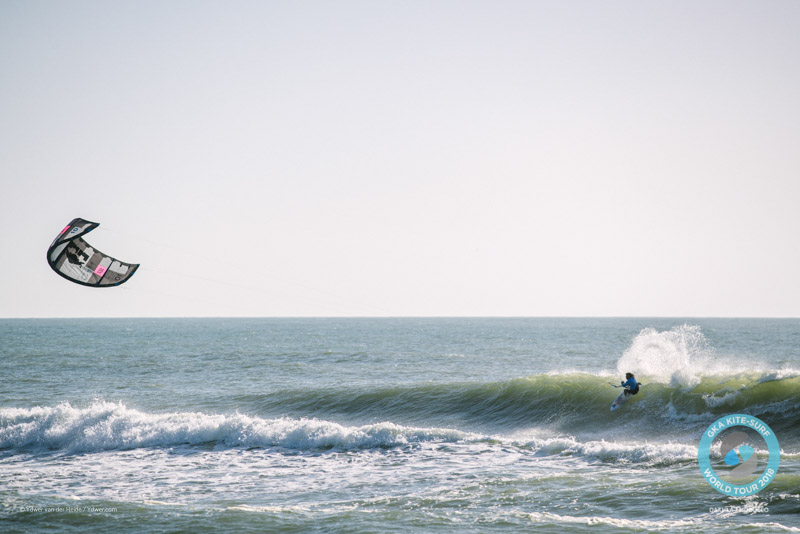 After their warmup session, the riders and event crew were addressed by the General Secretary of the Wilaya of Dakhla, Mohamed Saikouki, at the opening ceremony on the beach in front of Westpoint Dakhla Hotel, marking the official start of the event. 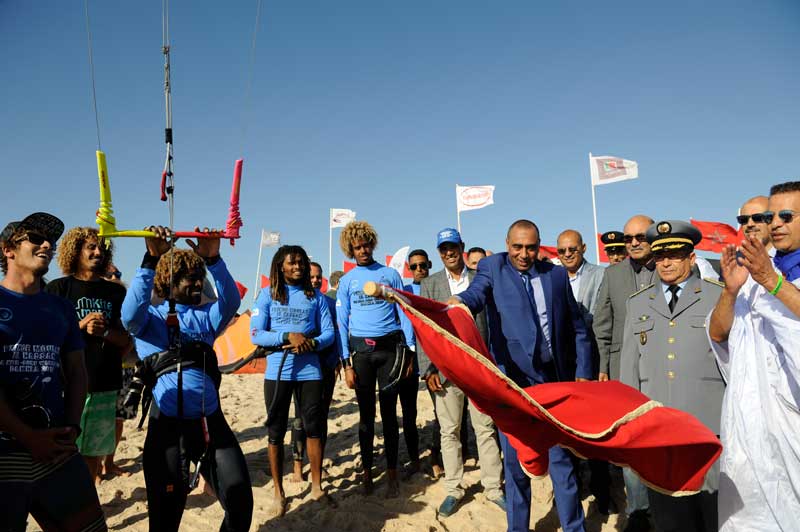 The flag’s been waved – that mean’s go time!

So now, with the formalities done, it’s time to get down to business which is sure to happen today (Wednesday) when the riders hit the water for round one of the men’s division!
The sign-up for the event has been a great success, with 34 men and 14 women.

The first two rounds in the men’s division are starting up this morning. The heats were drawn yesterday and, with no trials to get through, the majority of riders with no 2018 tour seeding (or a low one) have been awarded ‘byes’. This means they’ll progress straight to round two where they’ll take on riders with a tour ranking who competed at the first event of the season in Cape Verde. Only two of the round one heats will be competitive with two riders in them (heats 4A and 8A), but then the sparks will really begin to fly in round two.

MEN’S ROUND ONE HEATS (EXCLUDING BYES)

9A: Sebastian Ribeiro vs Douglas Juliana
9B: Jan Marcos Riveras vs Mustapha Abbar
10A: Keahi de Aboitiz vs Amune Aabid
10B: Francesco Cappuzzo vs Mohamed Mansour
11A: Ismail Adarzane vs Glen Gritxi
11B: Ralph Boelen vs Hamza Finou
12A: Mitu Monteiro vs winner of Round One – Heat 4A
13A: Paulino Pereira vs Charlie Wise
13B: Pedro Matos vs Ahine Roussafi
14A: Matchu Lopes vs Elias Seadi
14B: Nicola Abadjiev vs Hamid Bouceta
15A: Camille Delannoy vs Paulo Aurelio
15B: James Carew vs Mansour Daouidi
16A: Airton Cozzolino vs Achraf Bentajar
16B: Tony Cili vs Yaris Del Ono

The key focus this morning is on the men’s heats, but the women’s heats have also been drawn with most of the riders competing in round one. Moona Whyte and Jalou, the two top ranked riders, have been awarded byes though and will go straight into round two.

WOMEN’S ROUND ONE HEATS

1A: Carla Herrera Oria vs Olga Agniezska
1B: Charlotte Carpentier vs Olivia Jenkins
2A: Jalou Langeree (bye)
2B: Odile Cavin vs Kirsty Jones
3A: Marie Gautron vs J.C Catarina Edin
3B: Ines Correia vs Maria Kinkina
4A: Moona Whyte (bye)
4B: Justyna Sierpinska vs Laila Puehringer

If you’re not sure how the tour tables look right now then check out the top fives below and click here for the full GKA Kite-Surf World Tour 2018 rankings.