Day Three saw the completion of the Semi-finals for Men and Women, with the reliable Akyaka thermal winds commencing at midday as was forecasted. 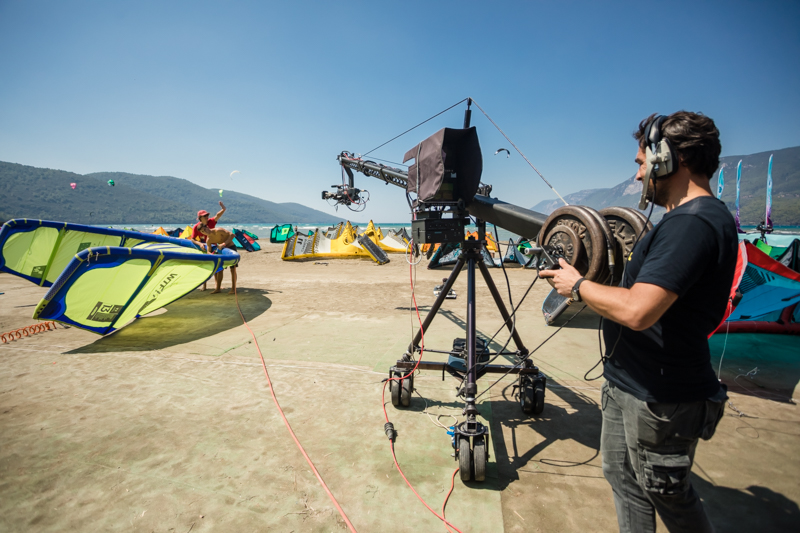 Heat 15 was first in sequence, after being cancelled yesterday after the 3rd trick attempt. This heat saw two Former World Champions, Alex Pastor and Youri Zoon, head against two up and coming athletes, Nino Liboni and Arthur Guillebert. Alex Pastor continued on his strong performance from yesterday, and was absolutely in his zone throughout the heat, looking calm and collected as he landed trick after trick in his classic AP style, finishing the heat with a nice KGB5. Youri Zoon was feeling good, and landed a nice KGB5 of his own. Despite crashing his last trick attempt, he advances just behind Alex Pastor into the Semi-Finals.

Heat 16 was a tough competition from the very start. Adeuri Corniel from the Dominican Republic blasted out a nice Backside 317 to get things going. Carlos Mario, our current World Champion, was on fire as usual, and for his third trick attempt he pulled out an incredible Heart Attack 7, scoring 9.73. He followed it through with a Hinterberger Mobe 9, and easily cleared his way into the semi-finals. Adeuri Corniel went through just behind him, sadly knocking out Val Garat and Anthar Racca from the competition. 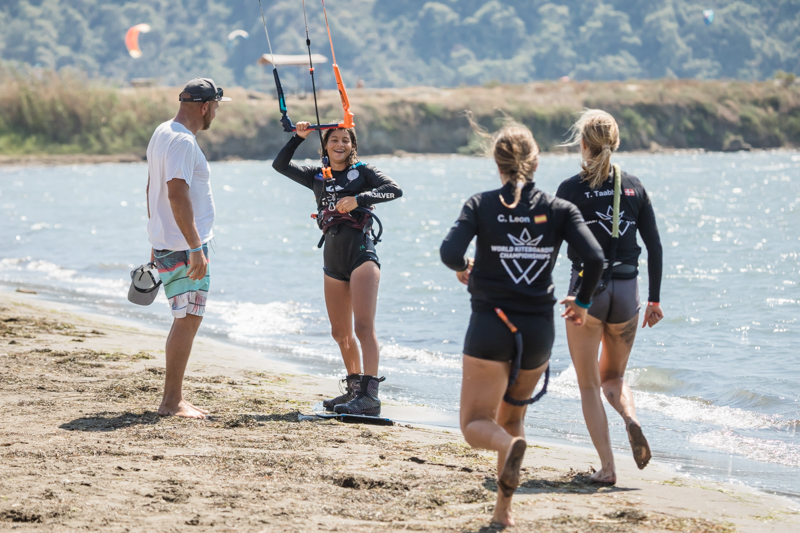 The Women’s semi-finals were outstanding, with an incredibly high level from all of the female competitors. The WKC has some incredible new talent in the Elite Championships. Mikaili Sol, 13 years old from Brazil, wasted no time and performed an impressive Heart Attack to open scoring 9.17. She followed it up with a Slim 5 scoring 9.77, and stylish grabbed KGB scoring 9.73. An incredible start for the young rider. She was unstoppable, and secured her spot in the finals here in Akyaka. Therese Taabbel rode so well from the start, and it seemed as though she had a good lead, however she failed to perform on her very last trick attempt, and that opened the door for Claudia Leon from Spain to jump ahead of her and pass through to the final.The young Spanish rider was delighted to reach the finals for her first ever Elite Championship event. Rita Arnaus, who has been performing so well throughout the competition, and Therese Taabbel were sadly eliminated. 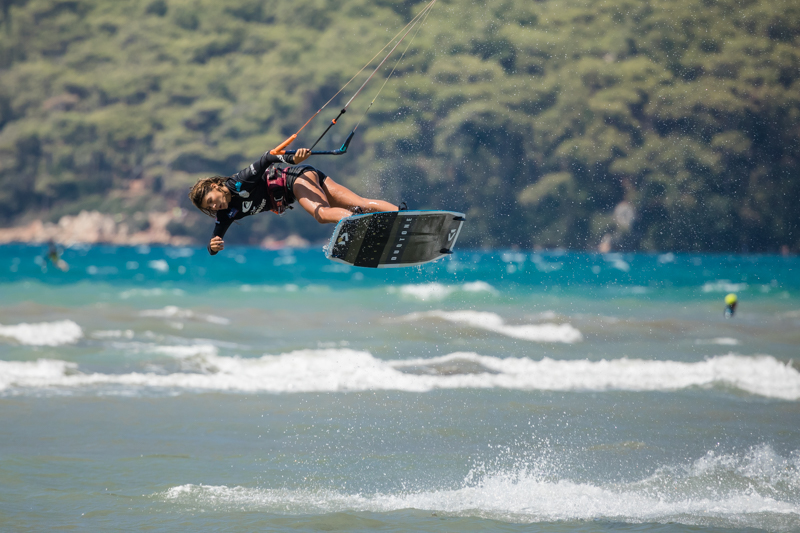 Paula Novotna had her eye on the goal from the start of the second women’s semi-final. She landed five solid tricks in classic Novotna powered style, giving her the spot she was looking for in Sunday’s final. Maureen Castelle from France was riding a great heat, and it looked like she was aimed to join her, but Francesca Bagnoli from Italy was not willing to let go that easily and with her last trick managed to claim that much desired second spot in the final, unfortunately knocking out Castelle and Belogorskaya. 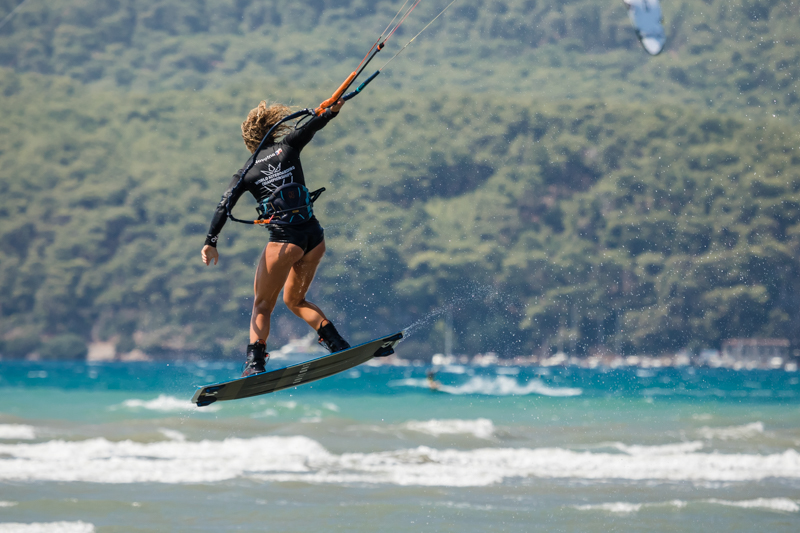 The first Semi-final for the Men was Heat 17, where Adeuri Corniel from the Dominican Republic was unstoppable. He had already made it clear from Day one that he was aiming for the final, and he definitely proved his point today. He stomped every single trick attempt, and was beyond happy to gain his hard-earned spot in Sunday’s final. The battle for second place was not an easy one, as Zoon, Chabloz and Teixeira gave it all they could. Maxime Chabloz, the youngest rider in the heat, went massive on his 5th trick attempt, but unfortunately landed too close to the beach and ended up jumping over spectators, saving himself and others from injury. The judges counted the attempt as a crash, but he did not let that deter him. He went for a Slim7 scoring 8.93 points and clinched the second spot in the finals, a huge result for this young competitor. Teixeira narrowly missed out after riding incredibly well, and sadly him and Zoon were eliminated from the competition despite their maximum effort. 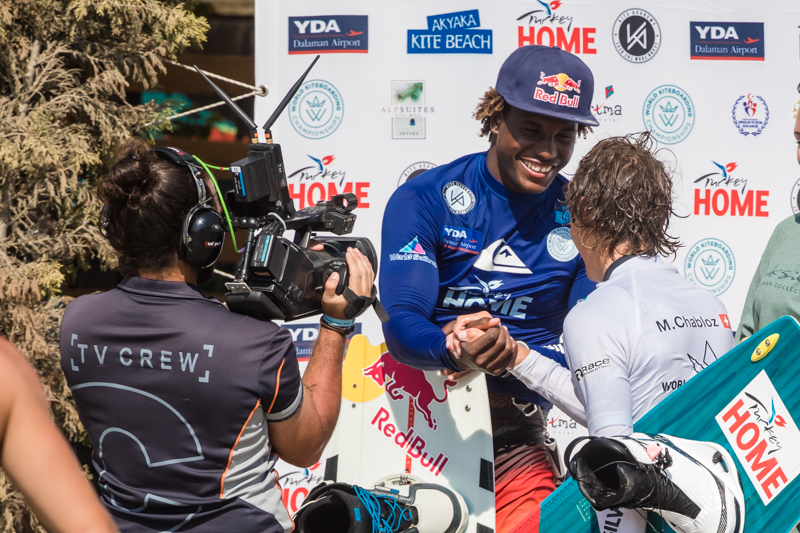 The last semi-final of the day was Heat 18, where Carlos Mario, Current World Champion, opened up with a perfect Heart Attack 7, scoring 10. What a start to the heat! He followed it up with a KGB7, landing close to the beach but managing to maintain control. He continued to ride well even though he was suffering a bit due to an injury to his arm, but still cleared his way into the final. The young Valentin Rodriguez from Colombia will be joining him, after going for some big tricks that included a massive Heart Attack 7 scoring 9.93. It was a disappointment for Alex Pastor, who looked like he was on the path to the finals. However he and Spiessberger could not quite land the tricks they were aiming for, and did not make through. 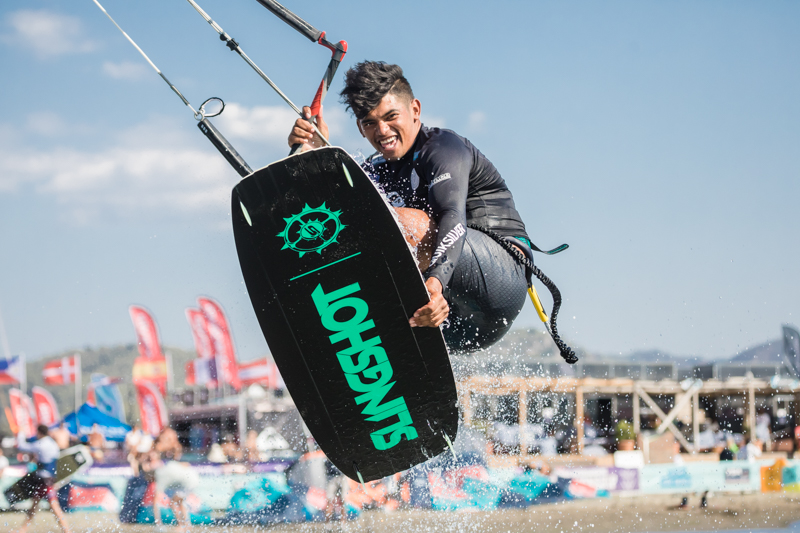 The level of riding from all of the athletes was incredible today, as each heat felt like a final. Tomorrow, we will hold the Men’s small final, and on Sunday it will be time for the main final, for both Men and Women.

All of the action today was live streamed on facebook and youtube, and we thank all of the fans from around the World for tuning in and joining us for this incredible event. The best is yet to come!