Day Two in Akyaka, Turkey was another complete day of freestyle action. Solid wind conditions throughout the day allowed for the completion of Round 2 for both the Men and Women, and the first two heats of Round 3 for the Men. 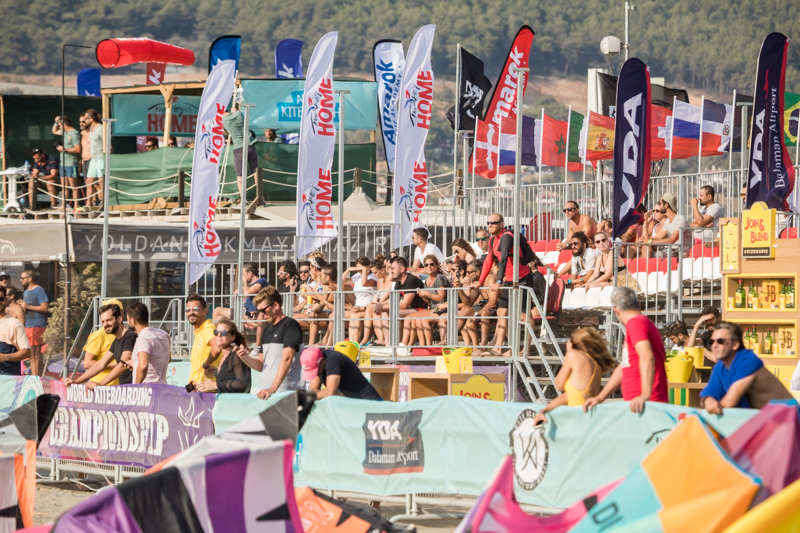 For the Freestyle discipline, all riders get 7 trick attempts during their heat, with the top 4 scores counting. The riders are judged on a combination of height, power, technical difficulty, execution and innovation. All the performed tricks are divided into different categories.

What is very clear at this event, is that there is no such thing as an easy heat. All riders have fought extremely hard right from the first round, the level has increased exponentially since last year, so each heat means the riders have to give it their all, or they will quickly be left behind.

Men’s Round 2 Heat 9 was the first of the day, picking up from yesterday, the heat was resumed from the 4th trick attempt. Posito Martinez from the Dominican Republic continued to build upon his good performance from yesterday, landing each trick attempt and securing his spot in Round 3. Joining him was Stefan Spiessberger from Austria, who remained focused and advanced together with Posito.

Heat 10 saw Belgian/Spanish rider Jerome Cloetens and Louka Pitot from France battle against Maxime Chabloz from Switzerland and Luis Alberto Cruz from the Dominican Republic for the top two spots. The points remained close throughout the heat, but it was eventually Luis Alberto who climbed to the top spot followed by Chabloz, both of whom will pass through to the next round. 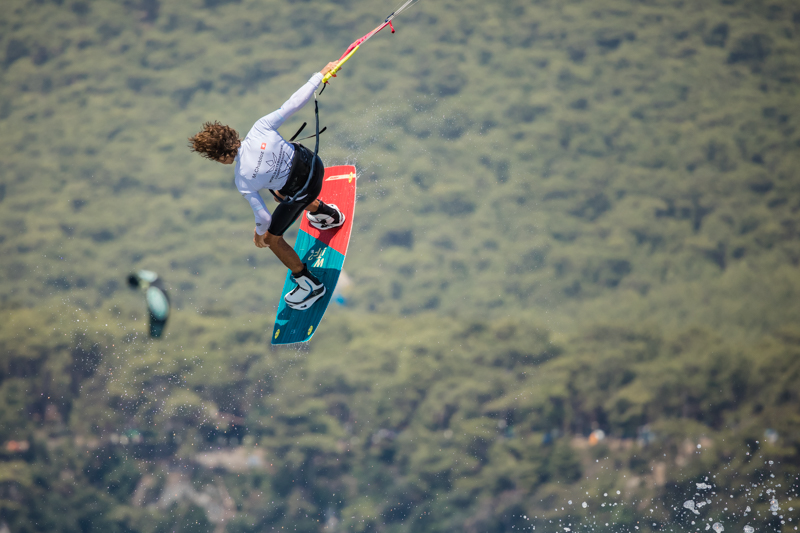 For Heat 11, it was 17 year old newcomer Nino Liboni from France who showed the determination necessary to finish in the top position. He rode a good heat, and will be joined in the next round by fellow Frenchman Val Garat, who narrowly made his way through, despite injuring his leg and struggling to finish the heat.

Mexican rider Anthar Racca rode incredibly well for Heat 12, landing a big Slim7 scoring 8.27. He was incredibly happy to have improved on yesterday’s performance, and he passed through to the next round in 1st place. Joining him was Arthur Guillebert from France who just managed to snatch the spot from Paul Serin.

Round 2 of the women was next in sequence, starting with heat 5. Two local riders, Leila Kut and Gisel Ozen faced some tough competition, coming up against young Spaniard Claudia Leon, and Russian rider Kristina Belogorskaya. Leon was on fine form today once again, and landed a nice Slim Chance scoring 7.1 points. She cleared the heat with confidence and passed to the next round. Bologorskaya was delighted to be joining her.

Therese Taabbel suffered a bad heat on Day One of the competition, but was clearly on form today, putting on a great performance of powered riding like we are used to seeing from her. She rode solidly landing a great BS313. Paula Novotna was determined to show us what she is made of, finishing her round of tricks with a massive Heart Attack scoring 8.5 points and giving her the win. Taabbel and Novotna pass through to the next round, with Vera Klabbers from the Netherlands sadly not making it through. 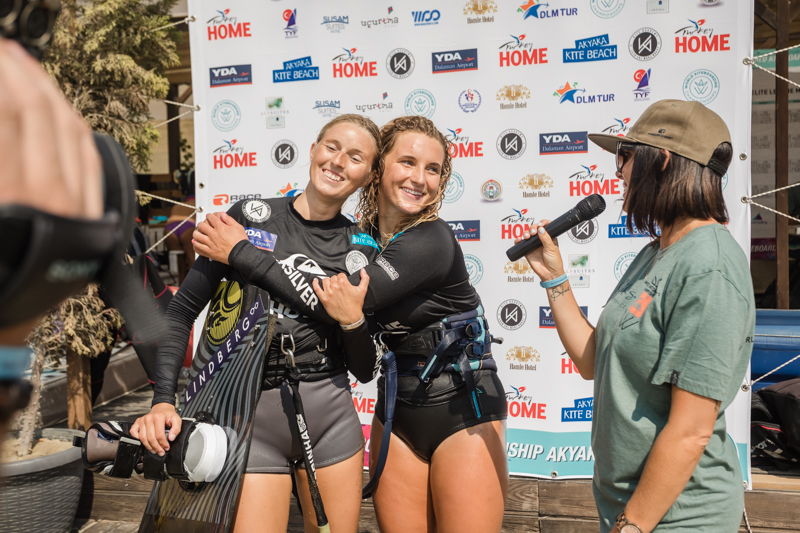 Round 3 was next in sequence, as there was a struggle to complete the heat due to shifting wind conditions. After a short break, the heat was resumed after the wind shifted and came in from the opposite direction, stronger and gustier than we have seen in Akyaka so far. Maxime Chabloz, however, did not disappoint, and did a massive Heart Attack 7 scoring 8.3, just managing to keep control of his landing close to the beach. Chabloz maintained his consistent scores, finding the balance between going big and maintaining control, and cleared his way through to Round 4. Young Colombian Valentin Rodriguez gave it his all, fully overpowered, and it paid off as he joins Chabloz in the semi-finals, sadly knocking out big names Nicolas Delmas and Posito Martinez.

The gusty conditions continued for Heat 14 and the athletes struggled to perform their chosen tricks, the frustration evident on their faces after each attempt. Stefan Spiessberger managed to keep it together, and landed a good Backside 315 on his last attempt, it paid off and he passed through to the semi-finals. Set Teixeira also managed to cope exceptionally well, and climbed his way up to 1st spot, joining Spiessberger in the next round. Gianmaria Coccoluto was so close but missed his chance, and was eliminated together with Luis Alberto Cruz. 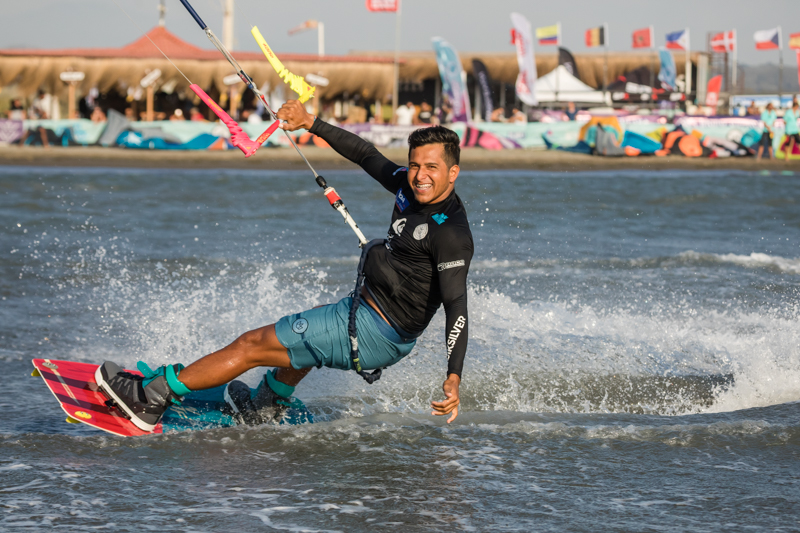 Heat 15 was abandoned after the 3rd trick attempt, but will be resumed tomorrow morning.

The WKC live stream was running all day, hosted by Bas Koole and Tom Court. If you missed it, you can re-watch all of the event on our facebook page. 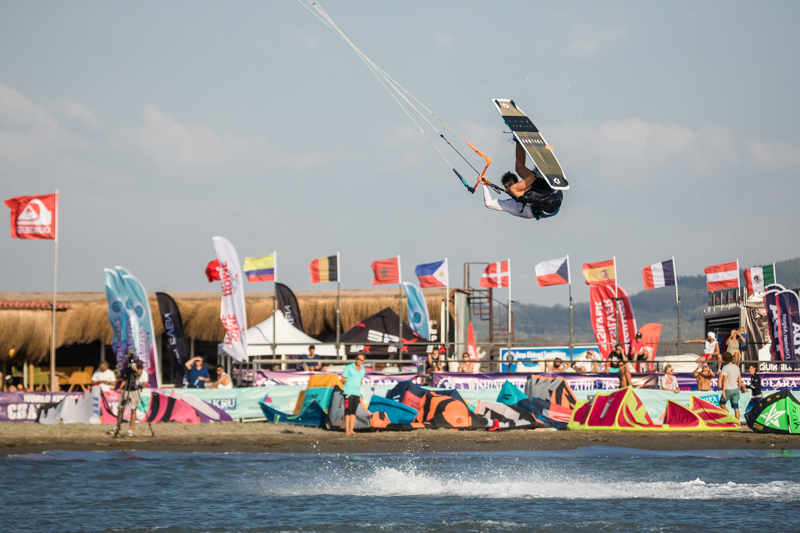 To see the ladders and scores from each heat, please visit our website.

The skipper’s meeting has been called for 10am tomorrow, with the first possible start at 11am. Be sure to tune in! 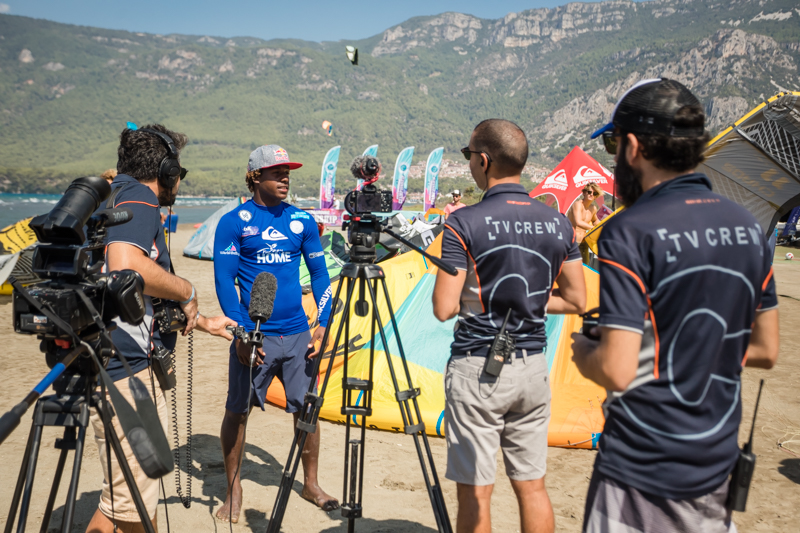