The first order of Sunday business, the last day of the Jeep Tarifa Pro, was to complete the women’s KSWT strapless freestyle contest. Local specialist Carla Herrera Oria had stamped her authority on the discipline with the win over a stoked Johanna Catarina from Sweden and Charlotte Carpentier from France. 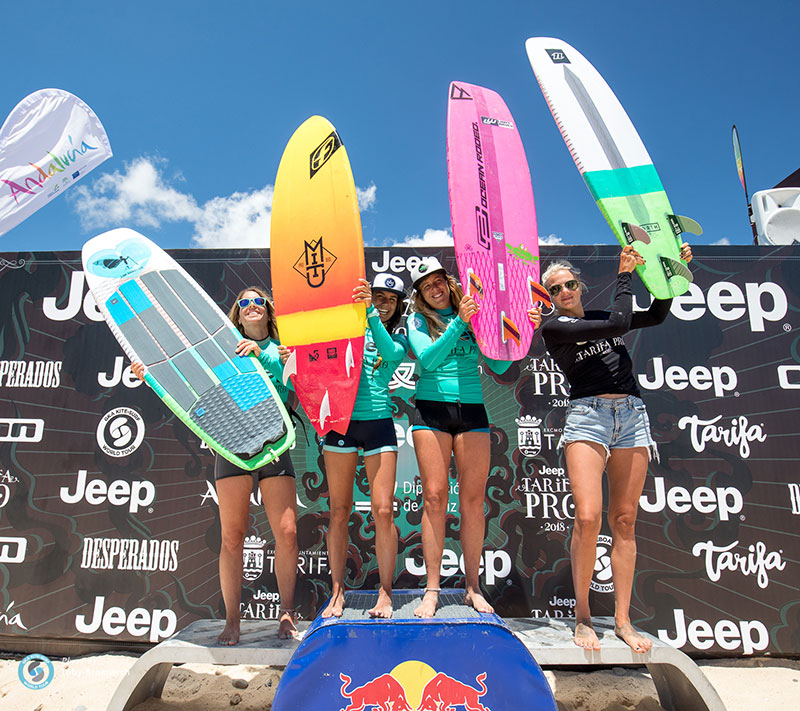 This pure strapless freestyle discipline (rather than wave riding, which this tour also incorporates) is yet to fully blossom for the women and this was the first time that enough women had registered for a pure strapless freestyle event for them to have their own ladder, which was great to see! Carla managed to land a board-off, a one footer, an air reverse, a back roll foot switch combination and some good big airs as well.

The GKA Kiteboarding World Tour Air Games hasn’t had the easiest start since inception this year. The first event at the Mondial du Vent in Leucate had no wind; the first time that event at that spot in France hasn’t had wind in 20 years! This week Tarifa kept us waiting until the sixth and final day of the Jeep Tarifa Pro to truly deliver for the Air Games! 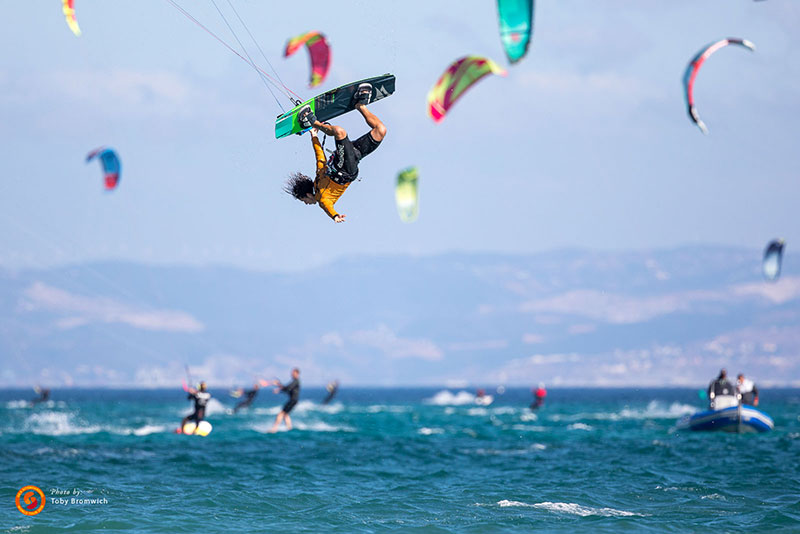 Two short afternoon sessions in the week had brought us almost to the semi final stages of the men’s single elimination, but the women were yet to hit the water for the first time.

The Air Games format requires riders to complete tricks in three categories: big air (can include board-offs), handle-passes and kite loops and an added element of excitement certainly came from the moments that the riders decided that they’d done enough in the handle-pass and kite loop categories and that it was time to come in, change up a kite size and switch board for one with foot straps rather than boots. Calling their support teams into a frantic hustle of action on the shoreline, the crowd seemed to feed off this obvious extra tactical layer. 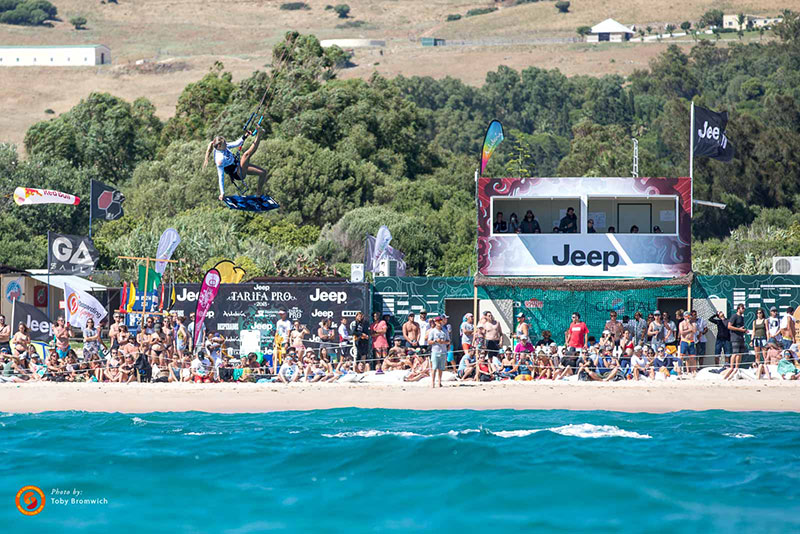 All 11 girls absolutely rocked it today in different ways. Their different approaches were appreciated by all, from the big air spins, loops and board-offs of Angely Bouillot and Bibiana Magaji, to the fantastic all round performances of French rippers Maureen Castelle and Pauline Valesa. However they weren’t able to reach the final stages such was the calibre of the top four at this event. 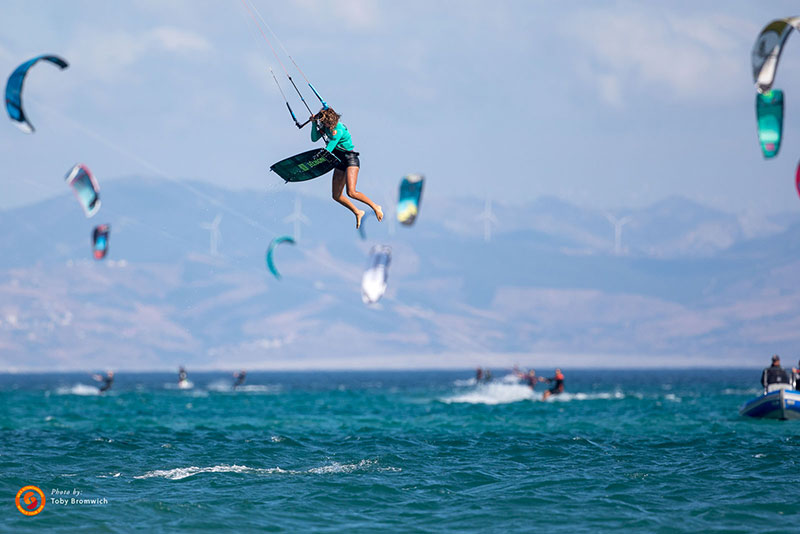 Ably assisted by her training coach Fabio Ingrosso (who also coaches men’s second place finisher Maxime Chabloz) Mikaili Sol (just 13 years old!) absolutely nailed her heat structure. She said afterwards, “When I realised early on that the tricks I’d chosen for each category were scoring highly, I stuck with those in each heat and just tried to go bigger and bigger with them. I did an S-mobe handle-pass, a double front board off and a boogie loop.”

Coach Fabio Ingrosso could be seen gently gesturing to her each time she approached shore to stay calm. He later said, “I told Mikaili, ‘You’re only 13, you have nothing to prove, but if we get a top four finish then that’s already fantastic.’ We practice this sort of game of kite during training when I tell her to go out and do big spins, so she really enjoyed this event.” 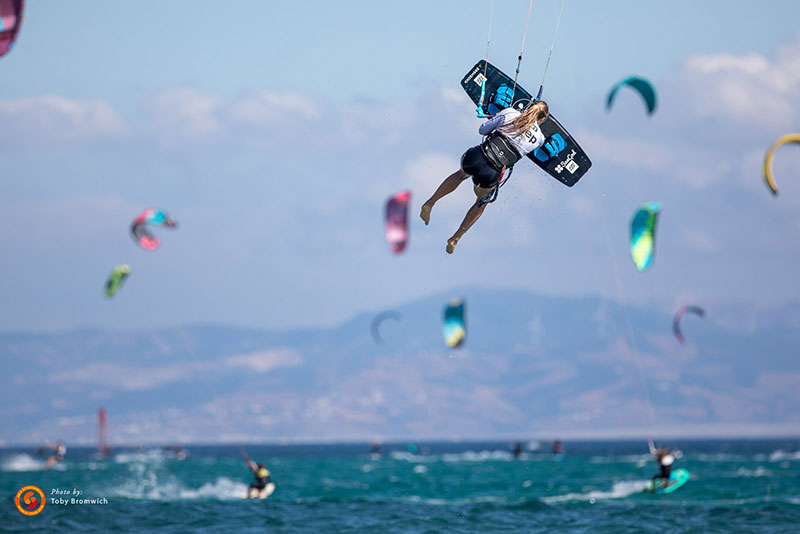 Hannah Whitely is a fearsome competitor and her outwardly beaming personality belies a passionate competitive drive. A three time British Freestyle Champion in the past, she combined accomplished and relatively big board-offs with her command of new school drive. 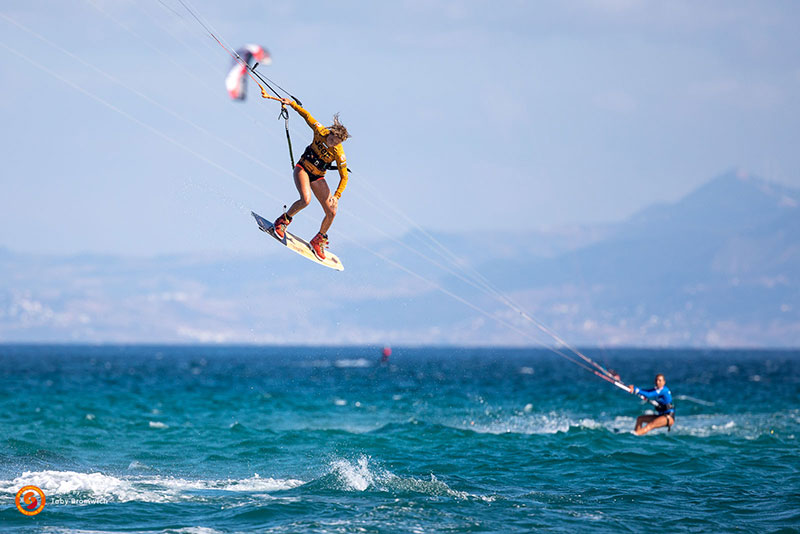 If Dutch 18 year-old Pippa van Iersel hadn’t drawn Mikaili Sol in the semi final, she would have been a real contender for top spot today. Her wakestyle power is incredible with huge pop and a low kite and when she landed her 313s today with speed, all the guys were giving her credit. Her kite loops were also the biggest in the women’s division and we’re looking forward to seeing what she can really do when the wind further picks up!

When Nicolas Delmas and Maxime Chabloz both unleashed massive kite loop front blind mobe attempts merely 20 yards from the shore with the first 20 seconds of their heat, it was clear that the boys had built up a lot of anticipation as they’d been made to wait two days to complete their last heat of round four. 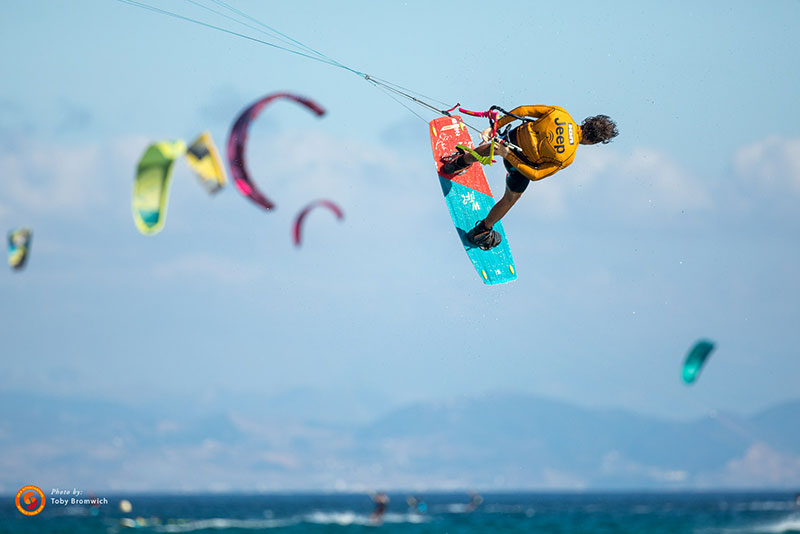 An intense battle between two well matched new school riders, the first half of their heat delivered the ultimate in powered freestyle and the excitement only grew when each came in to the beach during the final minutes to quickly change boards, but neither had left enough time to actually land a board-off! So it was Maxime who was adjudged to have done enough, carried through by a kite loop 7 where Nicolas had only managed a 3. 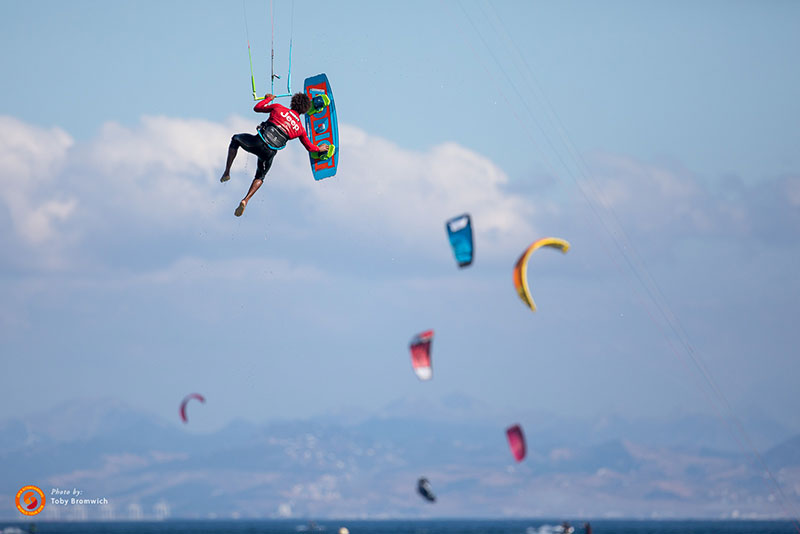 On his way to winning the competition Jesse Richman overcame Dominican CrazyFly sponsored rider, Posito Martinez, who has hugely impressed this week with a natural flair for combining technicality with a seemingly better gear set up for going big in lighter winds. However when it came to absolutely nailing big scoring and fresh moves in each category at key moments, Jesse’s vast experience saw him through. When he failed once at a trick, the Hawaiian came straight back and nailed the same trick on his second attempt; not only cleanly, but even bigger to be sure. 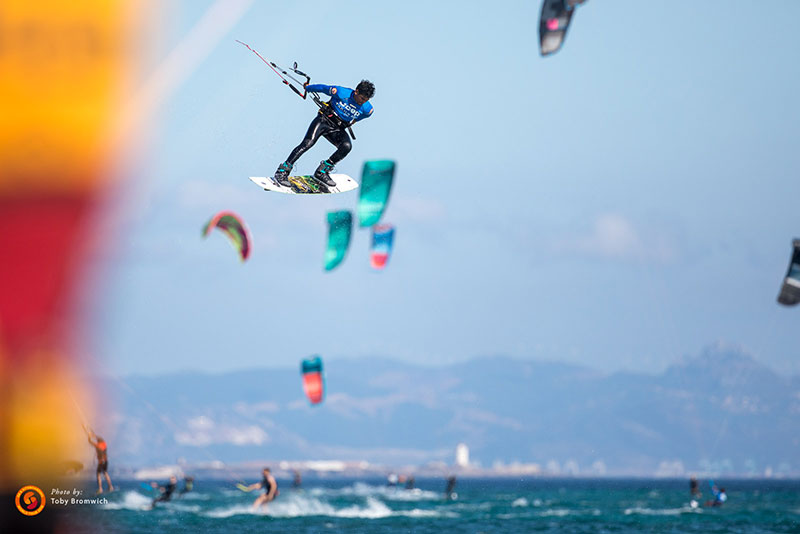 Carlos Mario is widely hailed as the most natural new school freestyle rider on the planet and is the most recent WKL pure freestyle World Champion. His absolute speed, power and seeming faultless ability to naturally add double handle-pass combinations to both the kite loop and handle-pass categories, he also gains huge amplitude and arguably goes as high in powered freestyle as he does when some other riders are sending basic big jumps. However, not all his landings were the cleanest today and his adaptation to board-offs was the weakest of the top riders. But it won’t take him long to adjust and it’s highly likely that with some focus he’ll be able to apply some radical innovation. 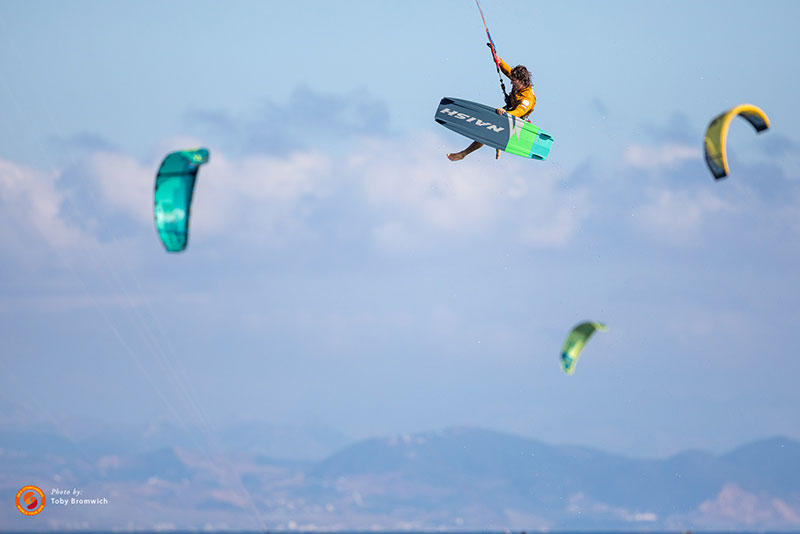 It was important to get the Air Games off to a good start at this the second event, to give the riders and public a really positive experience, to iron out the format with rider’s meetings this week… and with the fuse now lit we look forward to round three which starts in just a matter of days in Cabarete, Dominican Republic on the 9th July!

Jesse Richman and Mikaili Sol may have set the standard and delivered the Tarifan crowds a real show with wow factor, but the pack have now bought into the game. They also now have eight days to train for this new format before round three, which could be enough to catch up! 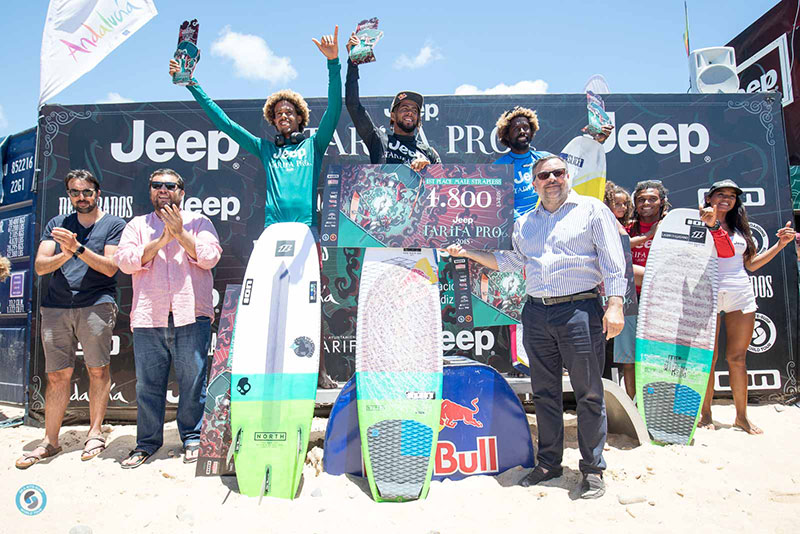 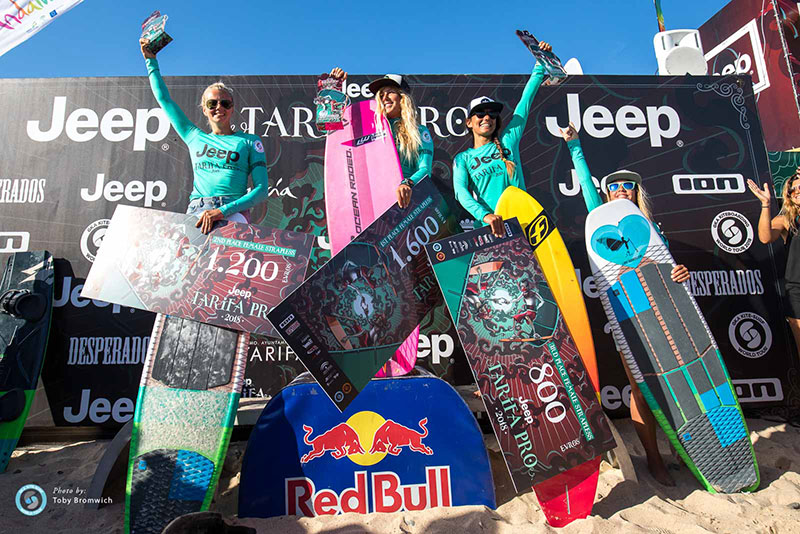 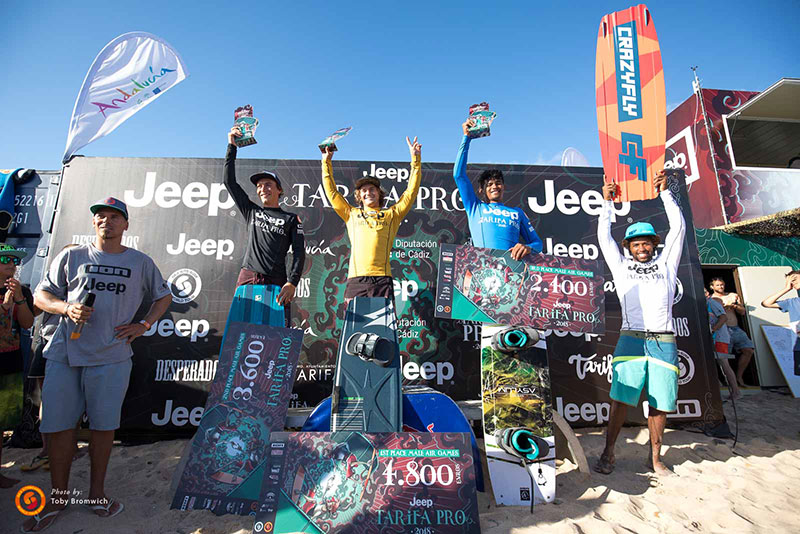 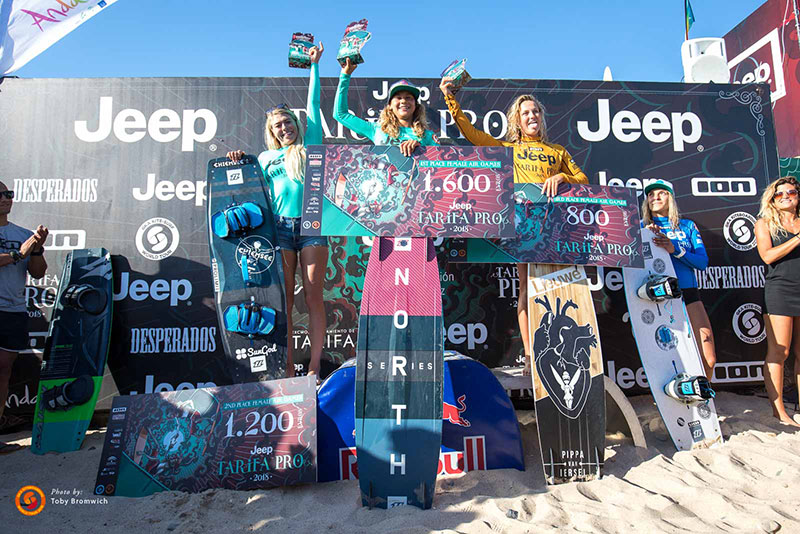 These first Air Games results set the season rankings as this is the first event with a result.

On the Kite-Surf World Tour, Airton Cozzolino still leads the men’s tour, but Matchu Lopes has moved up to third overall while Keahi de Abotiz’s suprisingly early exit from the single eliminations sees him slip to fifth:

Her win in Tarifa has seen Carla Herrera Oria take advantage of the absence of Moona Whyte and Jalou Langeree to take the lead (before one season discard):