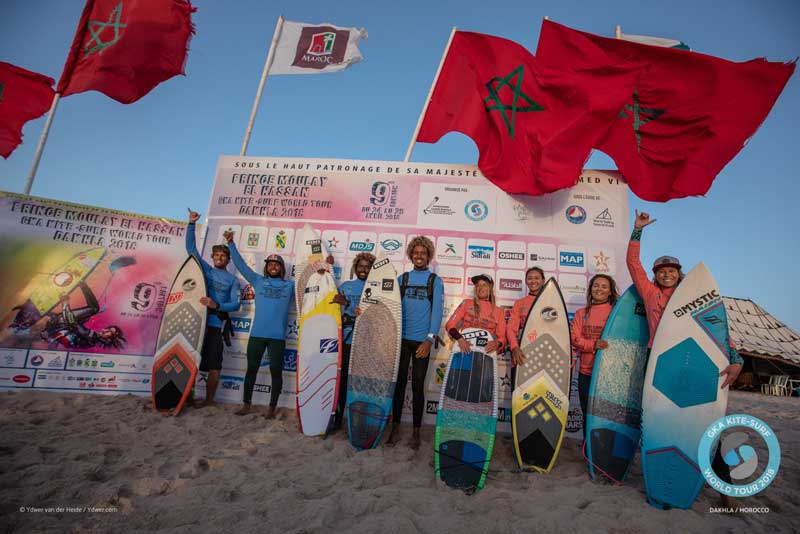 The Single Elimination finalists at the end of a long day of competition / Photo: Ydwer van der Heide

The wind forecast looks good, but the waves may drop off in the coming days, so at least there’s a result in the bag should things deteriorate in the week.

If you’re unfamiliar with this format, the riders will now go into another round, the double elimination, where they will compete in order of their placings in the single elimination. So the winner of the singles is already in the final, the runner-up is already in the semis, and so on. It’s a second chance for a rider to become a hero and charge up the ladder. 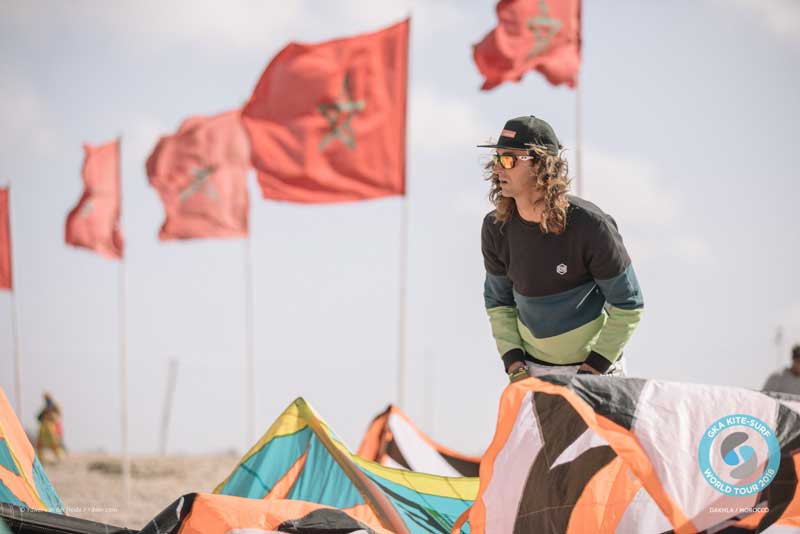 Tony Cili gearing up before round one / Photo: Ydwer van der Heide

Wednesday’s single elimination heats were to be judged on a split criteria of 70% wave riding and 30% strapless freestyle and the men’s division were up first for round one.

The majority of male riders who’d entered the event with no 2018 tour seeding (or a low one) had been awarded ‘byes’ so they would be progressing straight to round two where they’d meet seeded riders who’d competed at the first event of the season in Cape Verde. That was where things would start to get interesting. 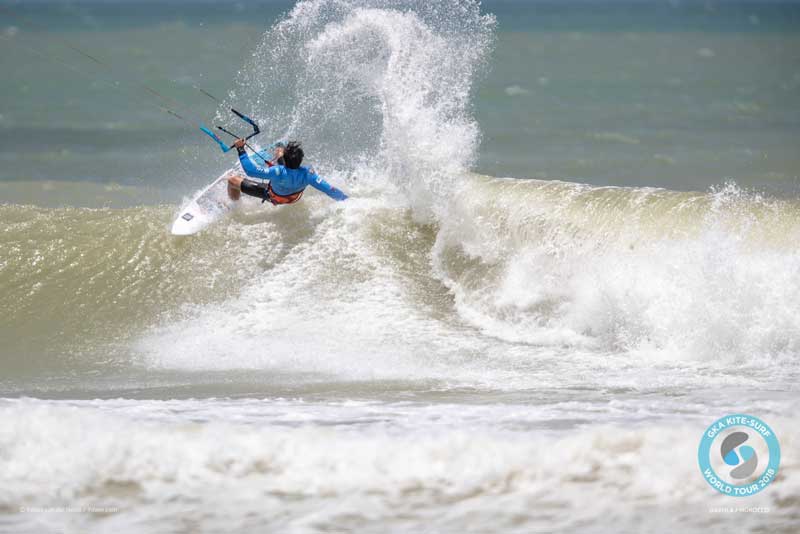 Pedro Matos – all out from the off / Photo: Ydwer van der Heide

Pedro Matos and his North teammates Sebastian Ribeiro and Matchu Lopes were putting in standout performances straight off the bat in round two with Pedro and Sebastian churning out powered, choppy assaults on the lip and seeking out point scoring opportunities in the shore break close to the main beach. Matchu was also making excellent wave selections and showing that, even backside in smaller waves, he’s a force to be reckoned with. 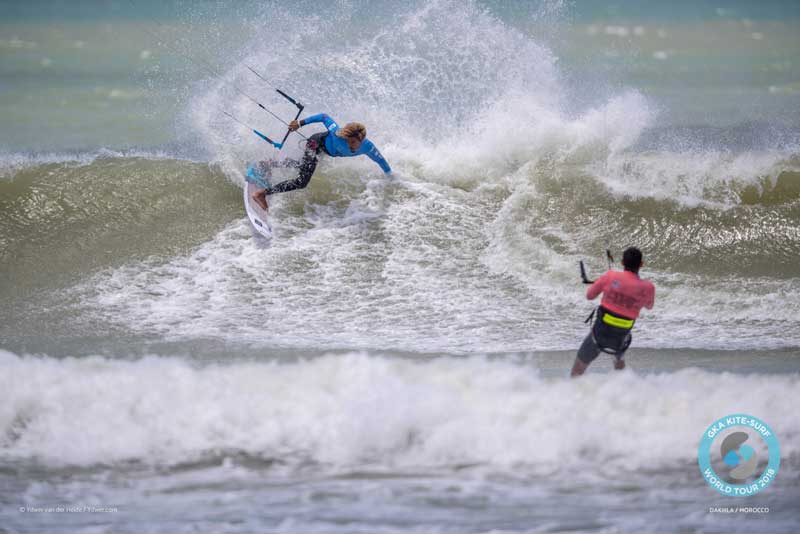 Airton then entered the fray and he opened with a huge new trick that hasn’t yet been seen in competition – a massive strapless backroll with a board-off board spin. Not his usual low angle technical stylings, but it shows that he’s opening up his repertoire this year which will make him even harder to beat in strapless freestyle showdowns! 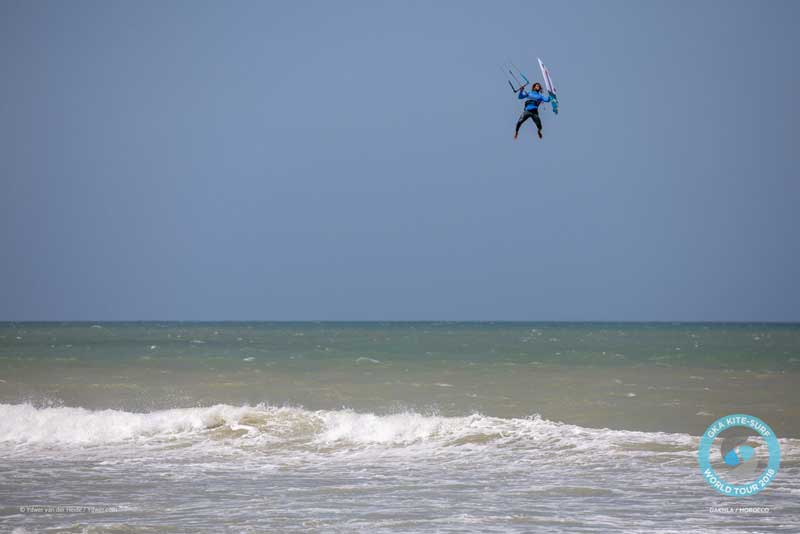 The waves were a bit sporadic in some round two heats but things improved in round three and this was where big names would start to leave the competition. Airton kept up his seemingly relentless assault and Paulino Pereira rose to the challenging, punchy conditions with his high-octane, full-tilt riding style. 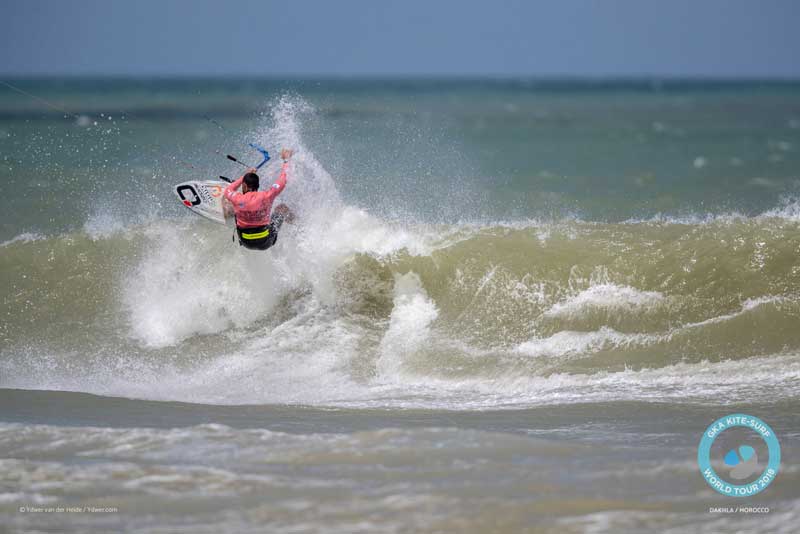 Paulino pulls out all the stops in round three / Photo: Ydwer van der Heide

Young Aussie ripper James Carew also rode with his customary levels of commitment and managed to snap his board mid heat before Matchu sprinted down the beach to hand him a spare and get him back in the fight. #teamwork.

Strapless freestyle ability was what carried a few of the riders at this point during lulls in the waves but there were still solid sets coming through and Keahi, who’d had a slightly slower start than expected, began to gather speed with his eyes set on a Single Elimination final (he is after-all a four-time champion here in Dakhla). 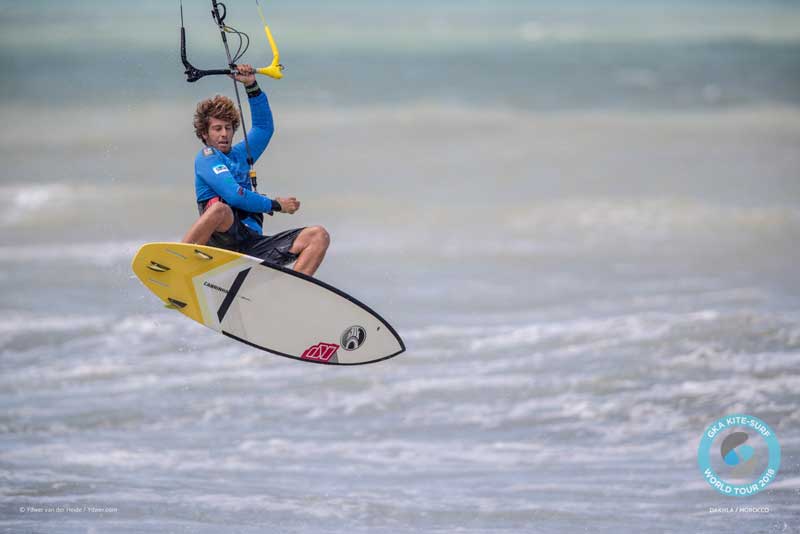 THE WOMEN TAKE THE STAGE

Next came a break from the men’s division and the action moved to the point at Oum Lamboiur where round one of the women’s division would begin. Ines Correia was a standout rider in that round, her wave selection was super-strong and she was linking up solid turns even on the best sets of the round. She continued her form in round two and booked her place in the semis against tour leader Moona Whyte. Carla Herrera Oria and Jalou Langeree would go on to claim the remaining semi-final spots. 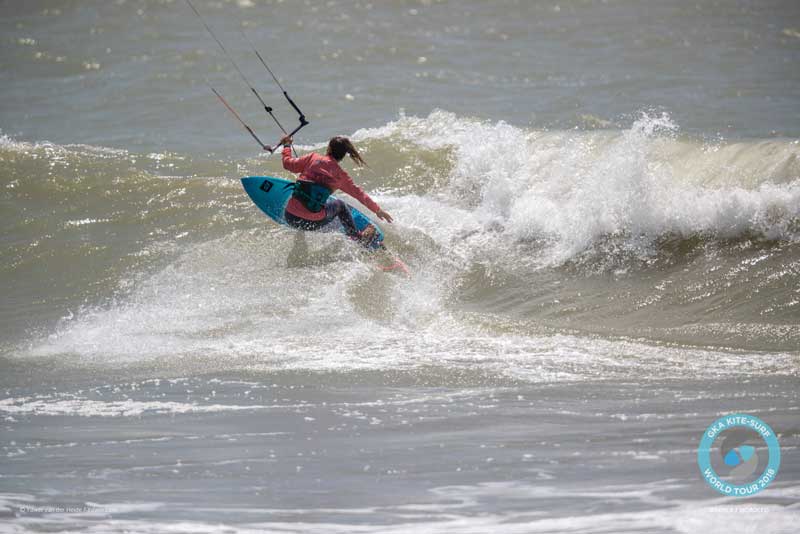 Ines knows a thing or two about right-handers and brought that to bear in round one / Photo: Ydwer van der Heide

The women’s and the men’s semi-finals ran back to back in shifty conditions as the swell began to back off and the wind softened. Riders were out on bigger kites by this stage and Jalou Langeree showed just how far she’s improved her backhand riding by beating Carla to claim a place in the super-final against Moona Whyte. This meant Carla would face Ines in the mini-final. 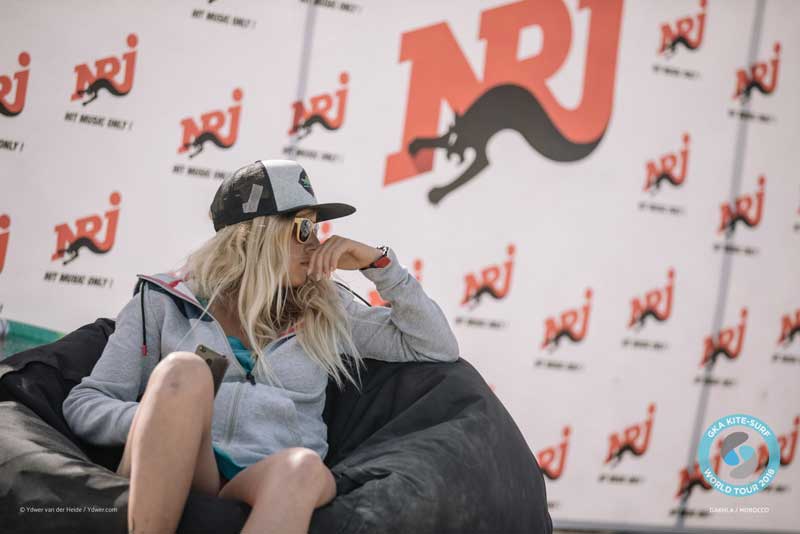 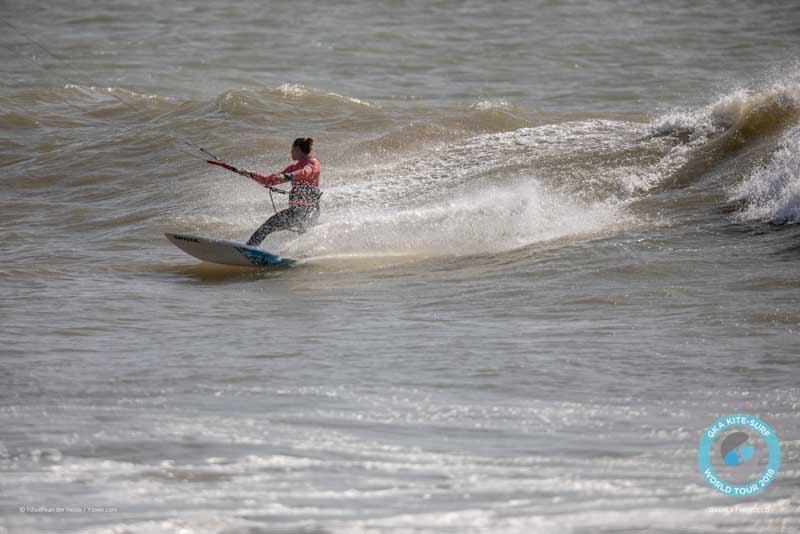 In the men’s, Keahi narrowly beat Mitu in the first semis heat before having to do it all over again after the judges decided to rerun the heat due to a technical error. Matchu and Airton then met in yet ANOTHER crucial heat (how many times have they done this now?) and what followed was a masterclass of how to perform in lesser conditions. 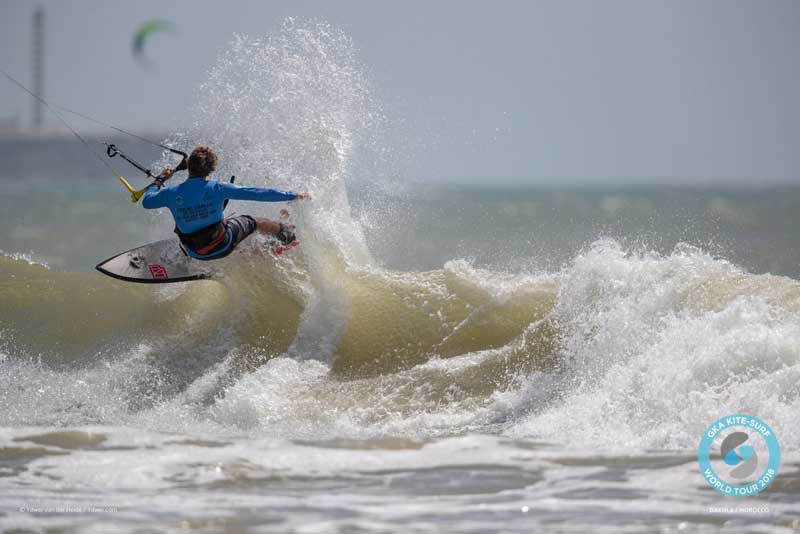 These guys routinely ride the best waves in the world, but sometimes an even bigger test is what you can achieve in smaller, less-ideal conditions and this was where these guys shone. Neither rider gave the other a sniff, but Airton managed to beat his old friend Matchu and would meet Keahi in the finals, while Mitu and Matchu would battle it out for third place.

In the men’s, Airton kept up the charge in a supremely tight heat against Keahi as these two seasoned competitors eeked all they could out of the faltering wind and waves.

Matchu and Mitu’s third-place heat was similarly close, and any one of these riders would be justified a podium. Mitu won it and joined Airton and Keahi on the steps at the end of play. 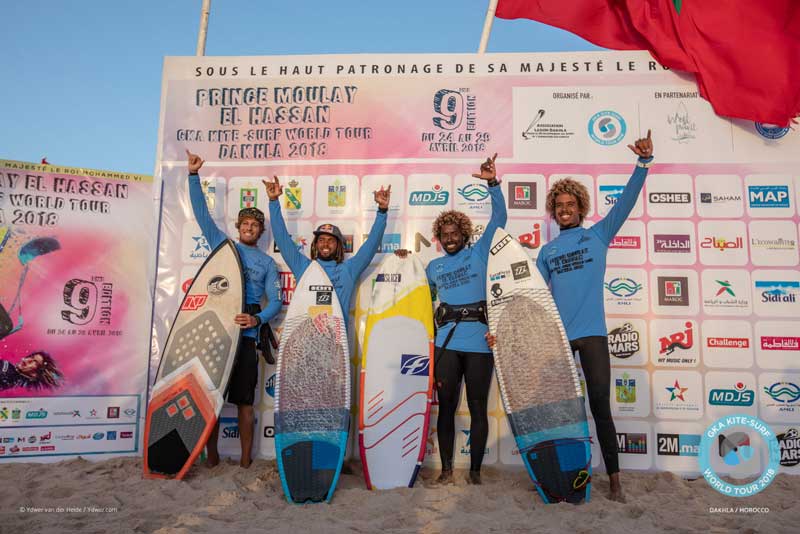 In the women’s final, Jalou Langeree rode strongly and snatched the top spot from Moona’s grasp. Jalou’s one of the few girls who has been working on her strapless freestyle riding as well and that no doubt added to her final score with Moona second, Ines in third and Carla in fourth. 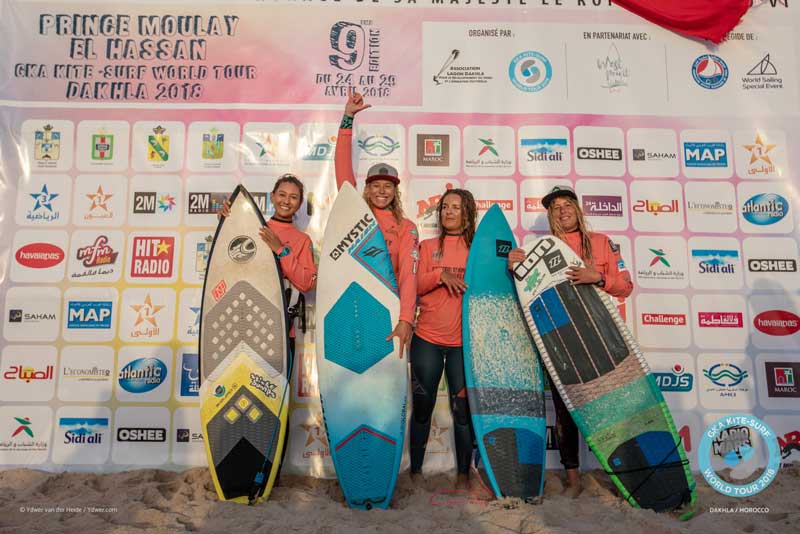 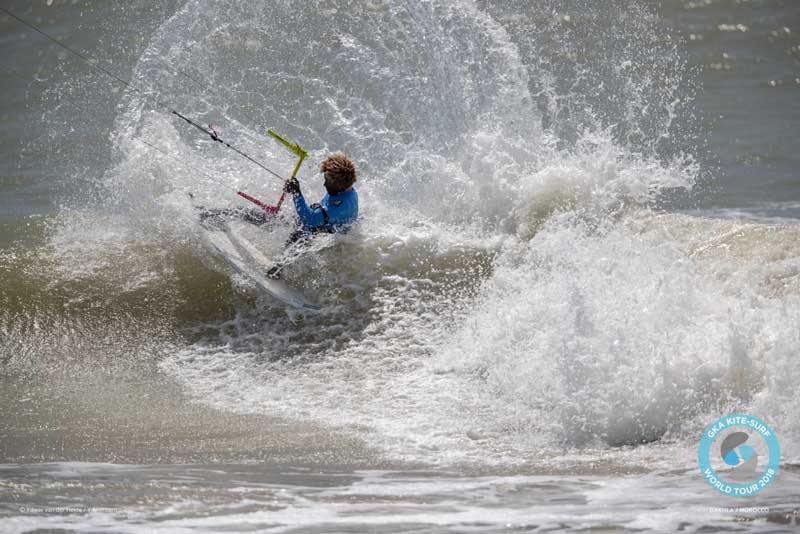 So that’s the Single Eliminations in the bag, and that means that there’s now a fallback official result for this event no matter what the conditions bring this week. However, that doesn’t mean the main event is over yet by any means, and with the double-eliminations yet to run, all the riders will have another chance to take a crack at the podium here in Dakhla!

The wind looks strong but more shifty for Thursday, but we’ll be keeping you updated on social media (Facebook / Instagram) as the day unfolds.

If you’re not sure how the tour tables look right now then check out the top fives below and head to our site for the full GKA Kite-Surf World Tour 2018 rankings.